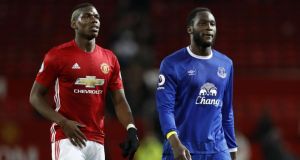 Romelu Lukaku was due to have his medical in Los Angeles on Thursday night before sealing a £75 million (€85m) move to Manchester United, with the striker expected to join José Mourinho’s squad when they arrive in the city on Sunday for the club’s five-game pre-season tour of America.

Lukaku has been holidaying in California with United’s Paul Pogba, who is a good friend and who has the same agent, Mino Raiola. The 24-year-old was due to fly back to England on Friday for pre-season training with Everton.

However, as Mourinho is intent that Lukaku should be confirmed as United’s second summer signing as soon as possible, the manager has decided this is the best way to push the transfer through. The move means that, barring a last-minute hitch, United will have landed Lukaku ahead of Chelsea despite the west London club believing they were in pole position to prise him from Everton.

Chelsea maintained the stance even after news broke on Thursday that United were sure they were closing in on the player.

If Lukaku does complete the transfer he will follow Victor Lindelof, the central defender who moved from Benfica to United for £30m last month. Mourinho is still intent on adding a central midfielder and, possibly, a wide forward. Wayne Rooney is expected to leave United for Everton, with his presence on the flight to the west coast on Sunday in the balance.

Zlatan Ibrahimovic scored 17 goals in the league – Juan Mata was the second highest scorer on six – but the Swede ruptured a ligament against Anderlecht in April and was not offered a new contract. United were interested in signing Antoine Griezmann but the French forward decided to stay at Atlético Madrid.

Antonio Conte had identified Lukaku early on as his replacement for Diego Costa, with their confidence forged on a belief that the Belgium striker’s preference has always been to rejoin the club he left in 2014 for £28m. Atlético Madrid are expected to make a bid for the Spain forward, though it remains to be seen whether they match Chelsea’s valuation.

Losing out on Lukaku would represent a significant blow and place further strain on Conte’s relationship with the board. Reports in Belgium have suggested the manager has spoken to Lukaku in recent weeks, outlining where he sees him in his plans and stressing the player’s significance to Chelsea’s approach. Conte had envisaged the deal being completed before his squad return for pre-season training on Monday.

He has been frustrated by Chelsea’s inability to add to his squad, with only Willy Caballero, on a free transfer from Manchester City, confirmed.

Asmir Begovic, Nathan Aké, Tammy Abraham and John Terry have departed, either on permanent or long-term loan deals. Conte, who infuriated the hierarchy by texting Costa to inform him he was no longer in his plans, has pinned much on Lukaku’s addition, and the onus is now on the board to lodge a bid with Everton.

The alternative options for Chelsea would be Álvaro Morata, whom United had targeted only to drop their interest after Real Madrid refused to lower their asking price of €90m, or the Torino forward Andrea Belotti.

United are still hoping to sign Nemanja Matic from Chelsea but that deal may not go through if United complete the Lukaku signing. United are prepared to pay £40m for the Serbia midfielder but the Premier League champions are not ready to sanction that sale before they have signed Tiemoué Bakayoko from Monaco. Chelsea have agreed a fee with Roma to sign the Germany defender Antonio Rüdiger.