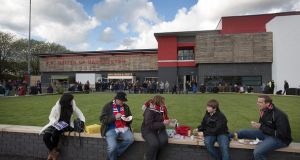 The outside of Broadhurts Park, the home of FC United. Photograph: Colin McPherson/Getty

Jim Brunt’s slightly tenuous link to Bohemians has its roots in a romance from 20 years ago, his involvement with FC United in a break-up of sorts. It will be low key in comparison to with Celtic’s sold out game across the city in Tallaght but to him at least today’s friendly between the two clubs at Dalymount will be a little bit special.

Brunt started visiting Phibsborough two decades ago when he began coming to Dublin to see “a local lass,” and through the summer months, when the club he followed, Manchester United, were out of season he’d get a quick football fix by popping around the corner on match nights.

Later, in 2005, when a group of disaffected United fans set up FC (as he routinely calls them) he was initially reluctant to make the move. But a year later he let his season ticket lapse and became a member instead of an organisation intended to feel a little more like a club than a conglomerate. These days, after initially volunteering to run a turnstile, he is the club’s vice-chairman.

It has not all been plain sailing for FC. At the time of their formation there were many who believed the project was doomed and that those behind it would drift back to Old Trafford with their tails between their legs. Alex Ferguson described the initiative as “sad” while some devotees of the Premier League outfit suggested it was divisive.

Those who set up the club were defiant although divisions emerged among them over time and 12 months ago, amid remarkable levels of rancour over the way in which the club was being run, there was a major upheaval at board level with elections producing a radical shake up.

“I think people were probably a bit too focussed on getting the ground done and maybe they missed a couple of other things,” explains Brunt, one of those who came in with the intention of getting things back on track, with an air of diplomacy that some of his predecessors lacked when openly warring with each.

“It is a hard adjustment to go from renting a stadium and only working on a match-to-match basis to actually moving into your own ground and having to deal with maintenance, a bar manager, pitches to hire, all of that sort of admin . . . the club wasn’t properly geared up for that and that’s been the change over the last 12 months, to really get the structures into place, to properly manage the club.”

Their achievements after barely a decade in the game are remarkable. The ground Brunt refers to is Broadhurst Park, a 5,000 capacity stadium in Moston, north east Manchester, which, after a difficult planning process and other delays, cost around €7.25 million to build. There have, meanwhile, been four promotions (Rory Patterson was key to the first three and remains the club’s top scorer) since the club entered league football at what was essentially the 10th tier.

Managed throughout by the same man, Karl Marginson, they now play in the sixth, the National League North, and there is an academy, active community section as well as a close relationship with the local junior club.

Annual turnover is less than €1.5 million, smaller than some of the bigger League of Ireland clubs, but the team is still part-time and Brunt suggests that any change to the squad’s status is some way off with much work remaining to be done on the club’s financial foundations.

“We do need to stabilise the club, grow the function room revenues and things like that so that the club can support increased budgets for players,” he says.

“We have some ethical stances on what sponsorship we can take but we do need to develop those things so that they can sustain a move up to the next level; that is probably full-time football but that would be a big step and one that we are probably a little bit off at the moment.

“It would be great if we were pushing the top half of the table but we are not going to get over ambitious at the moment; we would like to grow the fanbase, particularly around the Moston area, and do more groundwork but in time we do have a ground that, with only a few modifications, would be suitable for a couple of leagues higher.”

It is an enviable set-up from the perspective of an Irish club with 4,000 members, an active pool of 300 volunteers, 90 of whom turn out to help on each match day.

For all the turbulence of last year, he says: “Everyone is convinced this is the right model. We are completely answerable to the fans. We are on the terraces ourselves often and we have regular meetings, board surgeries before the games all of which help people to be engaged. I think that in the end that means that people are looking out for the club and not getting too ambitious; they are more focussed on the long term future of the club.”

One of the attractions of Irish football, he says, is the number of fan owned clubs - Bohemians, Rovers and Cork City amongst them - and games like today’s provide the opportunity for those involved to exchange ideas. The very social programme of events at Dalymount certainly suggests that there is more to it all than just the game itself.

Still, there is the suspicion that he might occasionally yearn for an afternoon on the Stretford End but Brunt believes that his current club offers more by way of “an experience,” even if, he admits, the football is not quite so good.

“To be honest I like to watch football regardless of the level. There are less people there but we have the opportunity to wander around, congregate with your mates, have a beer.

“And if you have got two well matched sides then you can appreciate the winger who appears speedy at the eighth level. He might not that good at a higher level but it’s still entertaining to watch him at the lower level and great if there’s an atmosphere as well. When I’ve been at Bohs there is always that. It’s one of the things the clubs have in common.”

Bohemians play FC United on Saturday at 3.0. Shamrock Rovers v Celtic is on at the same time but sold out. Drogheda United play Ipswich Town at 2.0.