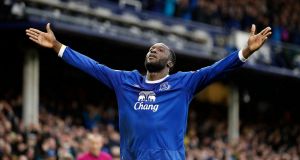 Manchester United have confirmed they have agreed a deal for Everton’s Romelu Lukaku. Photograph: Martin Rickett/PA

Manchester United have announced that a fee has been agreed with Everton for the transfer of striker Romelu Lukaku, subject to a medical and personal terms.

United believe they have deflected Chelsea’s frantic attempts to hijack the Belgian’s proposed move to Old Trafford and are set to wrap up the Belgian’s signing in a deal valued at £100 million (€113m), which would also incorporate Wayne Rooney’s return to Goodison Park.

“Manchester United is delighted to announce that it has agreed a fee with Everton for the transfer of Romelu Lukaku,” read a club statement on Saturday morning. “The transfer is subject to a medical and personal terms. A further announcement will be made in due course.”

Lukaku has been on holiday in Los Angeles with his friend and future club-mate, Paul Pogba, and is expected to meet up with his new team-mates in the city on Sunday when they touch down to begin a five-match pre-season tour of the United States. Pogba posted on his official Instagram page on Saturday, saying: “See you tomorrow in training rlukaku9 bienvenue AgentP.”

The deal will be worth an initial £75m plus a further £15m of easily attainable add-ons linked to achievements and appearances. Rooney, who is notionally valued at around £10m, would also return to Merseyside after a glittering 13-year career at United, swelling the whole value of the deal on the table to nine figures. Chelsea had tabled their own offer for Lukaku’s services, seeking to re-sign a player they had sold for £28m in 2014.

Yet, while the Premier League champions felt their proposal was roughly equivalent to that on offer from Old Trafford, Everton disagreed, with the Rooney element complicating the process.

While the former England captain and United’s record goalscorer was never formally considered to be returning to Goodison Park in part-exchange, his valuation had in effect been built into the Lukaku deal, pushing the overall value of United’s offer to the £100m Everton had always been seeking for the 24-year-old striker. The London club could not provide the same Rooney element in their own proposal and were clearly unwilling to inflate their bid to meet Everton’s overall valuation.

Even by Friday night, however, Chelsea had feared Lukaku’s representative, Mino Raiola, was intent on pushing his client towards Old Trafford, where he successfully moved Pogba, Henrikh Mkhitaryan and Zlatan Ibrahimovic last summer.

The London club, when submitting their bid, had indicated they were unprepared to match the agent fee – apparently amounting to eight figures – on offer to Raiola from United and, instead, felt as if they had presented Lukaku with a simple choice: push to join the club for whom he had initially been so anxious to play again, albeit against his agent’s financial interest; or sign for United in the knowledge Raiola will secure a bigger fee from the deal.

The player, it seems, has opted for the latter. Antonio Conte, who had targeted Lukaku as his first-choice replacement for the outgoing Diego Costa, will be infuriated by his club’s failure to complete a deal, though, while his exasperation was initially made clear to the Chelsea hierarchy, his ire is now increasingly directed at Raiola and Lukaku.

The champions must now decide whether to reignite their long-standing interest in Real Madrid’s Álvaro Morata – who had previously been targeted by United – or bid for the Torino forward, Andrea Belotti, whose buy-out clause is set at £87m. There is interest, too, in Arsenal’s Alexis Sánchez though the hierarchy at the Emirates stadium would be reluctant to lose the Chilean to rivals from across the capital.

Conte has been frustrated to date with his team’s progress in the transfer market, but the champions are close to confirming the arrival of Tiemoué Bakayoko from Monaco, and Antonio Rüdiger from Roma with both players due to undertake medicals..