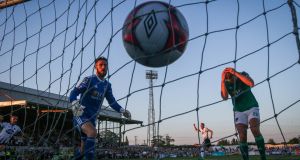 Sean McLoughlin’s injury-time own goal propelled Dundalk to the top of the SSE Airtricity League table as Stephen Kenny’s side made it nine wins on the spin with a 2-1 victory over Cork City.

With 90 minutes on the clock, it looked like the Leesiders were in the box seat after substitute Josh O’Hanlon cancelled out Krisztian Adorjan’s second-half opener.

The hosts, though, threw men forward and the unfortunate McLoughlin, under pressure from Patrick Hoban, diverted a Ronan Murray cross past Mark McNulty to move Dundalk two points clear with just 12 games to play.

Adorjan was named in the Dundalk team for just the fifth time this season while Sean Gannon made his first start since cracking a couple of ribs in the last meeting between the teams at Turner’s Cross in April, a game that Cork won 1-0.

Gearoid Morrissey, who scored an 89th minute winner against Bohemians in Cork’s last game before the mid-season break, was rewarded with a place in the starting XI - while John Caulfield also called upon the vast experience of Alan Bennett and skipper Conor McCormack.

McCormack lasted just 21 tetchy minutes in Cork’s 1-0 loss at Oriel in March before he was withdrawn by his manager, but he produced a very disciplined performance here, breaking things up effectively in front of his back four.

Cork struggled to impose themselves on the first-half but they did have opportunities, the first coming in the eighth minute when Kieran Sadlier’s cross from the right was directed back across goal by Graham Cummins but Jimmy Keohane couldn’t keep his header down.

Barry McNamee, who carried out his defensive duties well on the right, tested Gary Rogers with a stinging drive before squandering a good opening after he was picked out by Sadlier just before the interval.

Dundalk bossed things in between with Patrick Hoban outmuscling Bennett to set Michael Duffy up, but he couldn’t get the purchase required to test McNulty and Robbie Benson went close with a 35th minute pile driver that just flashed over the top.

The supporters in the main stand were still taking their seats when Adorjan broke the deadlock. Collecting a ball from Duffy on the inside left-channel, the Hungarian angled a fine drive across Mark McNulty to send the vast majority of the 4,117 crowd into ecstasy.

Cork struggled to regain their composure and Bennett was lucky to escape after flattening Hoban in the 51st minute. McNulty then completely flapped at a cross from Duffy but Shane Griffin was there to help his keeper out.

Caulfield reacted by making a double attacking substitution with Karl Sheppard and Josh O’Hanlon replacing Keohane and Cummins in the 62nd minute and his roll of the dice paid off as City drew themselves level four minutes later.

Bennett claimed a rare assist, hammering the ball back into the danger zone after Dundalk failed to clear a corner and O’Hanlon found himself ideally placed behind Brian Gartland to instinctively head home. With no VAR to call on, Dundalk’s pleas for offside fell on deaf ears.

With frustration seeping in, Dundalk suddenly found themselves in danger of losing the game and Sheppard fired wide before Sadlier forced Gary Rogers into a smart save down to his right.

Well marshalled by Bennett and Sean McLoughlin, Hoban had little to feed on but his moment almost arrived with 81 minutes on the clock when he rose to meet a Dylan Connolly free only to see his header clear the bar.

That looked to be that but with two of the additional five minutes played, Dundalk pushed down the left with substitute Murray’s devilish cross causing mayhem for McLoughlin, the young centre-back directing the ball past McNulty to settle an absorbing night.