Spain’s Dani Carvajal: ‘from now on the games are life or death’ 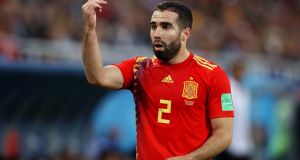 A World Cup last-16 match between Spain and Russia would have seemed like a woeful mismatch a month ago but Sunday’s game in Moscow is now much more difficult to call thanks to the 2010 winners’ underwhelming campaign and the hosts’ blistering start.

Spain’s preparations for the World Cup were thrown into turmoil after coach Julen Lopetegui was sacked and replaced by Fernando Hierro just days before the start of the tournament.

Hierro’s side topped Group B but picked up only five points.

Russia, the lowest ranked team in the tournament, dispelled the doom and gloom by blitzing Saudi Arabia 5-0 and beating Egypt 3-1 to reach the knockout phase for the first time since the collapse of the Soviet Union.

While Stanislav Cherchesov’s side were brought back to earth by a 3-0 defeat to Uruguay, they could cause Spain problems at a partisan Luhzniki stadium if they can rediscover the energy that propelled them to those first two group wins.

Spanish defender Dani Carvajal says his side, who drew 3-3 with Portugal and 2-2 with Morocco, must tighten up at the back against the Russians.

“On Sunday we have a very difficult game against the host nation, who scored eight goals in two games and who will have the whole country behind them,” Carvajal said.

“Russia is a strong and quick team and we have to be very wary of giving the ball away. We have to be very focused and set ourselves up to exploit their weaknesses and capitalise on their errors.”

However, Carvajal said teams will be forced to attack more in the knockout stages, where he expects Spain to come out from the shadows and up their game.

“From now on the games are life or death, you can’t play for a draw, you either win or you go home,” he said.

“I think these games are going to be different and we will recover our best form.”

Spain and Russia played out a thrilling 3-3 draw in a friendly last November, while their last competitive meeting came at the Euro 2008 semi-finals, where the Spaniards ran out 3-0 winners.

Russia’s veteran defender Sergei Ignashevich is one of three surviving members of that team in the current squad, and he said his side had studied how Iran and Morocco managed to trouble Spain defensively.

“Their defenders try to get high up the pitch and that leads to a lot of free space and allows you to create danger on the counterattack,” he said.

“That was one of Spain’s biggest weaknesses in the group stage, Morocco and Iran used that strategy and we will try to do it too.”

1 Owen Doyle: Creeping professionalism of schools rugby a threat to the game
2 GAA officials and referees brace themselves as new rules kick in, and this time it's for real
3 Caroline Wozniacki’s career ends with defeat to Ons Jabeur
4 Niall Quinn happy to step into the breach at FAI
5 Scotland’s Finn Russell missed training after Sunday drinking session
Real news has value SUBSCRIBE
Crossword Get access to over 6,000 interactive crosswords