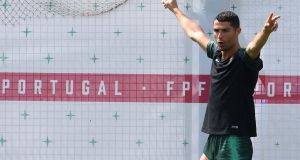 Cristiano Ronaldo during a training session at the team’s base in Kratovo before the last 16 clash with Uruguay in which he will be up against some familiar foes. Photograph: Francisco Leong/AFP/Getty

Okay, maybe not everybody, and maybe you didn’t. Plenty, though, did. Just try typing Portugal, Uruguay and “shithousery” into Google.

Yesterday though, Uruguay’s manager, Óscar Tabárez preferred to recall a different story and a whole different set of values, going back to the 1954 World Cup to tell a parable and question the “myths”, as he put it. Alongside, Luis Suárez sat captivated, silently gazing at him.

“There is not so much history between us so far, so history will be marked by tomorrow’s game,” Suárez had said.

What awaits in Sochi is spectacular. European champions in 2016 v South American champions in 2011; three of the world’s great strikers, men who scored 344 league goals over the last four years; the winner of four of the last five Ballon d’Ors, and probably a fifth this year too, voted the planet’s best player again – “not just a great player, their leader,” as Tabárez said; and the defender Diego Maradona calls a “superstar”.

Then there is the other stuff this clash brings – and clash is the word. That, at least, is the assumption.

The Madrid derby and the clasico recreated. Pepe v Suárez, Godín v Ronaldo. There is plenty of previous. There’s Ronaldo and Godín battling in the area, Ronaldo punching Godín in the back of the head.

There’s Suárez catching Pepe with a hand across the face one time and a boot across the shin another, the defender rolling round the turf with hand in the air, calling for the priest to deliver his last rites after both of them.

And then there is that Camp Nou meeting where Suárez pushes the centre-back, who bumps into the back of him, treading on his foot. Suárez turns and shouts something about his “mother’s shell”, which probably doesn’t really require a proper translation, to which the defender responds: “You pushed me first”.

At which point Suárez swears at him again and warns him that he’s “saving one” for him.

But here’s the thing: the defender he clashed with on that occasion was not an opponent today, it was a team-mate, José María Giménez. Just as the defender he gave a black eye was not Pepe, it was Godín.

All of which says something about the competitiveness that has helped make Uruguay football’s great overachievers; it certainly says something about Suárez – a superb footballer who plays as if he was no good at all, who talks about a nation who may not have the talent that others do but who will not be beaten for courage, fight, that garra charua of legend.

As Godín puts it: “Luis has got where he is because of the way he is: you see he gets angry, wound up, he fights, he protests.”

He might not for much longer. There was a moment here on the eve of meeting Portugal when the Uruguay striker was asked about the impact of VAR: yellow cards are down, red cards are down and penalties are up.

“The players talk about it,” Suárez said. “Players are protesting less.”

And with that he grinned and raised his hand: players like me. He also said that, having worked with a fitness coach before the tournament, he felt better now than in the opening game, adding with a smile: “Which isn’t hard.”

Still, the anticipation is that this will be tough indeed, a confrontation between some of the best, most competitive, most uncompromising strikers and defenders there are.

Yet that version of events was challenged here; there was something deeper. Uruguay have collected only one yellow card at this tournament; while their central defenders are tough there is a nobility about them; and, when it came to their final group game, they were in a similar situation to England but there was no doubt: they defeated Russia.

“We don’t play with the results: our objective is to win every game, that’s our mentality,” Suárez said. It has also, Tabárez suggested, too often been their obligation, a “heavy load to carry in your backpack” – one that conditioned their characteristics.

It was then that Tabárez talked about myth and reality; then too that he told the story of the 1954 World Cup. He had mentioned that this team has been together with him for 12 years. And, asked about the continuity within the team, the thread that runs through it as seen through the central defenders and leaders, from Diego Lugano to Diego Godín and Diego Godín to José María Giménez, he traced a line further back.

As he told the tale – slowly, quietly, at length, so out of keeping with his surroundings yet so like him – it took you. They call him Maestro for a reason.

“Fifa talk about fair play but that was there before. People talk about Maracanã, the “best in the world”, and that’s a weight. The idea that being second is no good. All those things that are said as if Uruguay was a country of 50m, like Colombia or Argentina, and that’s not the way it is,” he said.

“That can create a feeling of impotence and the first reaction to that is the culture on the pitch. We always wanted to see beyond that.

“When Uruguay lost in 1954, when they lost their status as an unbeaten team, they were defeated 4-2 in extra time by Hungary.

An Italian journalist wrote an article afterwards quoting the Hungary player who said: ‘I had to mark the best player in the world. Schiaffino was clearly better than me but because of those things that happen in football, we won the game.’

And the Uruguay captain said: ‘We have been beaten by the best team in the world.’ We have to recover that. These players have shown that they have that, and those values have been transmitted to the next generation.”

“We have prepared well,” Tabárez said. “But football teams are made of glass. It can break. A player can’t sleep because the baby cried. Another is fighting with his girlfriend. The World Cup is always special but we don’t know what will happen until the game starts.”

There was a suggestion that the answer to that question might be: not very much. That this game would be boring, bar the battle.

1 PSG break quarter-final curse with stunning injury-time victory
2 Exiled Seán O’Brien not ruling out a third Lions tour
3 Paul Clarke steps aside from Dublin role
4 Bundini Brown: The man who invented ‘float like a butterfly, sting like a bee’
5 Principality stadium in Cardiff to remain as a field hospital for rest of year
Real news has value SUBSCRIBE
Crossword Get access to over 6,000 interactive crosswords