Dundalk bid to round off a perfect season at Rovers’ expense 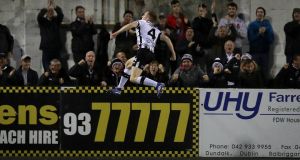 There is a sense in which this knack the league’s top two teams have developed for making it to every FAI cup final might be said to rob the knockout competition of some of its magic. It is hard to complain, though, when presented with a final that possesses as much potential as this one.

Nobody from the Dundalk camp sought to take issue this week with Stephen Bradley’s contention that there has been little to choose between the country’s two best sides in their recent meetings.

Vinny Perth and co. however, do have the luxury of allowing their results against Shamrock Rovers to do the talking. There have been some very good games but the champions took nine points more from four league encounters between the two sides on the way to lifting the title by 11.

The 2016 final, when Cork City beat what was then Stephen Kenny’s side despite having finished seven points adrift of them in the end of season table, is a reminder that there is still some element of unpredictability about these occasions. But Dundalk still go into the final as favourites despite the Dublin club’s belief they are a coming force and their determination to lay down a marker for next season this weekend.

Dundalk’s loss to suspension of Chris Shields will encourage them; he has been an important player for the Oriel Park outfit all season and was again impressive as Perth’s side won 3-2 towards the end of September to clinch the title.

There was certainly no great gulf in evidence that evening and his absence might just account for much of whatever difference there actually was. For all the options at the manager’s disposal, in any case, none is quite so adept at performing the particular role, one that might well be described as unnoticed and uncelebrated but for the fact that Shields has attracted so much attention and praise for the way he so often dominates that central area of the pitch.

Sean Murray could start there and it is one of a couple of roles Pat McEleney might be asked to perform if the Derryman is really reckoned to be match fit after a five week lay-off but given the strength of his options at centre back, pushing Sean Hoare that bit further forward may well be the way Perth opts to address the situation.

After the manner in which Shields was ruled out, the manager will certainly be aiming to ensure that the 28-year-old’s absence does not become one of the stories of the game.

It just might if Jack Byrne can make a more sustained impact here than he did in those previous meetings. There was clear evidence of his ability to open things up through the first half of that last game with three or four of his passes into the home side’s area having the potential to lead to goals if only his team mates had been that little bit alert to the possibilities at the key moments.

In reality, though, there will be intriguing contests all over the pitch, not least out on Rovers’ left flank where Sean Kavanagh seems set to bear the brunt of the responsibility for dealing with Sean Gannon’s driving runs from the right back position. Michael Duffy against Joey O’Brien should be another key encounter.

Having already won a double, Perth insists that the game is not season-defining for his side but there is more history to be written here if the team is on song again with the possibility of emulating Derry City’s treble of 30 years ago well within their grasp.

After so much building, meanwhile, Bradley has spoken openly, to his players and, this week, to the press about the need to win some silverware. His side look and feel as though they believe they can do it and their form since that defeat has been impressive with four wins, nine goals scored and five clean sheets in five league outings.

The test here will be of an altogether different order and, what with that long 32-year wait since their last triumph, we have somehow reached the stage where Shamrock Rovers stand for romance in an FAI cup final. That may not be something every neutral can embrace but, either way, there should be plenty to get worked up about.