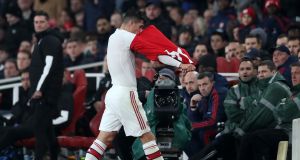 Arsenal Granit Xhaka is booed by fans as he leaves the pitch after being substituted off against Crystal Palace at Emirates Stadium. Photograph: Alex Morton/Getty Images

Unai Emery has confirmed that Granit Xhaka will not be involved in Arsenal’s match against Wolves on Saturday as the player continues to regroup after his high-profile falling-out with the Emirates Stadium fans last weekend. The head coach also offered no guarantee that the midfielder will continue in his role as club captain.

Xhaka did not play in the Carabao Cup tie against Liverpool on Wednesday but that decision had been made in advance of Sunday, when he angrily departed the pitch during the draw with Crystal Palace amid a cacophony of boos and jeers. Any suggestion that he would immediately return to Arsenal’s Premier League team was quashed by Emery, who said a focus on Xhaka would detract from a match that looks critically important.

Xhaka, who attempted to explain his actions in an Instagram post on Thursday night, has been training with his team-mates as normal but Emery refused to indulge questions about the midfielder’s continued claim to the armband, reiterating that the challenge posed by Wolves is his priority. Assuming the pecking order ascertained by the captaincy vote held among Emery’s players in September is adhered to, Pierre-Emerick Aubameyang will take the role tomorrow.

In his statement, Xhaka had explicitly mentioned some of the social media abuse he has received in recent weeks. Emery suggested that the measure of supporters’ true feelings is the atmosphere inside the ground.

“We can respect the people on social media but we also have to separate how much is real and [whether or not] every supporter is following that,” he said. “For me, the good response is how the supporters respond in our stadium. We have a lot of supporters around the world and we respect them, but the real response is in the stadium.”

Overall he was keen to steer the conversation away from Xhaka’s situation. He and the club continue to feel this is a wellbeing issue rather than one that simply takes in the captaincy and any rift between the player and supporters. He was more expansive on the subject of Mesut Ozil, who impressed on his return to the side at Anfield. Ozil is likely to be on the bench against Wolves, with a second Premier League appearance of the season looking realistic.

“He is in the squad and I think he has the possibility to play,” Emery said. “Now I am seeing him positive and consistent. On Wednesday with his performance in Liverpool, I think this is the way we want. Also I am helping him, supporting him, demanding of him. This is the Mesut I think everyone wants.

“When you talk about players who are ready to play under high pressure, one is Mesut Ozil. I think he has confidence and I think he has respect. When he is in that positive way, when he is available consistently, he has the respect from us and from every supporter.”

1 Bundini Brown: The man who invented ‘float like a butterfly, sting like a bee’
2 Leipzig see off Atletico to set up PSG semi-final
3 All-Ireland final: Kevin McStay’s guide to the Dublin team
4 Heroic insanity: When Michael Dunlop raced home in memory of his father
Real news has value SUBSCRIBE