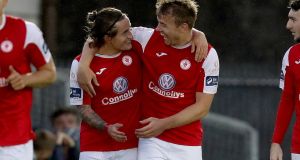 After the home side had begun the second half with Garry Buckley hitting the post, McCabe provided an instant response for the Bit O’Red, his cross deceiving Mark McNulty in the City goal.

In front of the television cameras, the first half started in quite a lively fashion but plateaued. City had two changes from the FAI Cup win over Bray Wanderers, with Alan Bennett and Jimmy Keohane in for Robbie Williams and Steven Beattie. Keohane played at centre forward, the fourth player to play there since the departure of Seán Maguire, but couldn’t get quality possession to him in the final sector.

Early on, City’s Kieran Sadlier – who scored at the Cross for Sligo earlier in the season – had a low shot from the left into the side-netting while Jamie McDonagh had to do well to cut out a Karl Sheppard cross, but Micheál Schlingermann in goal wasn’t sufficiently worked.

Coming up to half-time, Sheppard went close as he shot across goal, and then, immediately after the restart, Buckley hit the post with a curling effort.

The next chance brought the opener, but it came at the Shed End, into which Sligo were playing. McCabe’s intention may have been to cross from the left corner, but the ball looped over McNulty.

There were more than 40 minutes remaining when that went in, and though City brought on Connor Ellis and Steven Beattie in a bid to take the game to their visitors, clear-cut chances remained at a premium.

As the end neared, they became more urgent and the best effort came when Keohane’s header into the ground bounced up and off the crossbar. Keohane’s cross was then headed wide by Ellis and though Sligo had man of the match Craig Roddan sent off for a late second booking, they weren’t to be denied the victory.