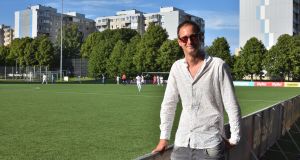 Matt Walker on his visit to Estonia: “That will be 14 countries covered by the end of the week,” he says of his visit to Ireland, “just 41 to go”.

It’s not unheard of for people to take career breaks to do a bit of travelling, but by the time Matt Walker returns to his job as a statistician with the British Ministry of Justice after his 18 months away, he’ll have racked up more air, land and sea miles than most would manage in a couple of lifetimes. And, along the way, he’ll be attending football games. A lot of them.

“I knew I wanted to do something different around this time of my life any how,” says the 40-year-old Londoner who, after reading Stamping Grounds by Charlie Connelly, the book that followed Liechtenstein’s less than successful efforts to qualify for the 2002 World Cup, came up with a plan: he would travel to all 55 Uefa countries in a single season and attend a top-flight match in each.

This week he’s in Ireland for Friday’s game between Bray Wanderers and Drogheda United before heading north for Glentoran’s meeting with Carrick Rangers the following day.

When the travelling is done, he plans on writing about his experiences and finding a publisher to turn them in to book form.

The project combines three of his great passions, travelling, photography and football, the Fulham supporter having already visited 80 countries before embarking on this particular adventure, attending two World Cups, the European Championships and the Africa Cup of Nations.

The Liechtenstein book appealed to Walker because, he says, he likes the “underdog mentality” and that is one of the themes he will pursue on his travels, many of which will take him off the beaten track.

“It’s not really about going to see the best quality football in Europe, it’s about how football compares across 55 countries, how the experience compares, how the fans’ attitudes towards football differ.

“I could easily have taken a year off to go and watch Real Madrid and Barcelona, I’d probably have spent the same amount of money to see much better football, but it wouldn’t have been as interesting. If you go to a Barcelona game you’re one of 90,000 there. Everything that they do is reported on in every sports newspaper in the world, it’s hard to get a unique angle.”

Starting in June, taking advantage of summer leagues to help him meet his challenge, he has so far visited Georgia, Iceland, the Faroe Islands and Norway, then Sweden, Finland, Estonia, Kazakhstan, Russia and Belarus in July, and earlier this month Lithuania and Latvia.

Standard-wise, he’d put Faroes football at the bottom of the quality league so far, despite the huge array of imports he saw lining out for local clubs – players from Serbia, Scotland, Macedonia, Hungary, Poland, Georgia, and so on.

“It’s all about money, of course,” he says, “they go where they can make more than they’d ever make at home, the highest-paid players in the Faroes earn around £5,000 a month. Similarly, I saw French players in Kazakhstan, players who’d be lower league back home and would earn much less.

“So that’s been interesting, as have some of the contrasts so far. In some places I’ve visited there was a real passion for the domestic game, but there were others where they’re fairly ambivalent towards football. As you go further east towards the Baltics other sports, like basketball and ice hockey, are definitely more popular, like in Belarus with ice hockey, where they struggle to get decent attendances at their football games.

“I was at a Dinamo Minsk game in a city with a population of around two million, but there were only 600 or 700 there. The official attendance was listed as 2,000, which was an absolute joke – I’m a statistician so I’m quite good at counting things.”

There’ve been other surprises too.

“I was at Ufa v Spartak Moscow and there were lots of women there, more proportionally than any other match I’ve been to. It was surprising, I would have expected a Russian game to very, very male dominated. I have to be careful not to generalise too much when I’m only at one or two matches in each country, it may have been an exception, but it was striking.”

He never expected his carefully planned itinerary to work out smoothly, but already there have been hiccups, including Latvia’s SK Babite, who he intended visiting, unhelpfully being chucked out of their league for suspected match-fixing.

“That’s another issue that crops up, it seems it’s a problem outside the top flights in Sweden and Finland and in the Baltic countries. Somebody said to me that the second division in Sweden is the most bent league in Europe, but I’m not sure if that’s true or not.”

When he returns to his desk at the British Ministry of Justice he will, you suspect, have some tales to tell.

* Walker will be posting updates and photographs from his journey at these links: