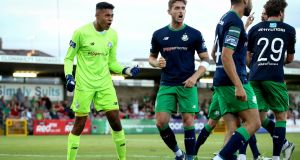 Sixteen-year-old Gavin Bazunu further enhanced his reputation with a sublime performance capped off by a superb penalty save, as Cork City dropped further behind title rivals Dundalk at Turner’s Cross.

It was frustrating night for those on Leeside, who failed to bounce back from last Friday’s defeat to the Lilywhites despite dominating vast swathes of this league encounter. They were left scoreless largely by Bazunu’s smashing performance - he is yet to concede a league goal in four games since replacing Tomar Chensinski last month.

Last time these two met on Leeside, it was Kieran Sadlier’s penalty that proved the difference, and having dominated the game up to that point, the hosts thought they had finally cracked Rovers’ code on the hour mark, as Karl Sheppard was bundled over by Joey O’Brien, having snuck in behind the veteran defender unnoticed.

Up stood Sadlier again, but despite drilling his penalty hard and low, Bazunu sprung to his bottom-right and stretched an extremely strong right palm to turn the powerful spot-kick around the post.

And moments later the teenager would then deny Karl Sheppard, showing fantastic reflexes to push his glancing header back into the inside of his left-hand upright.

A bad night almost made worse for the hosts late on, as Mark McNulty twisted his ankle coming out for a through ball. Dan Carr almost capitalised with the City goalkeeper down, but Alan Bennett was back to clear off the line, and McNulty’s injury will be a concern ahead of the visit of Legia Warsaw next Tuesday.