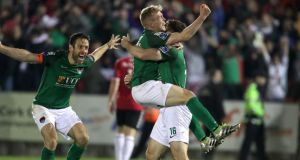 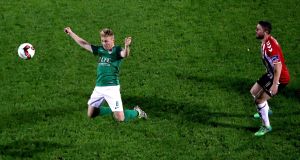 It could have happened two months ago, but few on Leeside will care, as this scoreless draw against Derry City secured Cork City’s first Premier Division title in 12 years.

A point so precious for the visitors too, who secure European football for next season, but the headlines are rightly reserved for John Caulfield’s men, whose win in front of a decapitated Derrynane stand is somewhat poetic given how this season has been split in two.

Not that they care how it happened.

“It’s the best moment of my life,” declared Steven Beattie, who has epitomised the spirit of this John Caulfield team better than most. “This is what you play football for, it’s why you come to these places, to win trophies. You’re judged on what you win and we have the Cup and the league now, and going for another Cup.”

It was Sean Maguire’s last minute strike at the Aviva Stadium almost 12 months ago that set the chain of events leading to tonight’s celebrations, and unlike the class of 2005, this group seem determined to seal the double in the first Sunday of winter.

“When you get older in your career you begin to think about your legacy,” reflected City stalwart Alan Bennett “.and to do that (be the first Cork team to win the double in 50 years) would be amazing. It was so important to win it at hom,e to inspire that next generation of players, fans, and volunteers. Garry Buckley was in the shed when we won the league in 2005, I was there in ‘98 (FAI Cup win), and if we could get the next Seanie (Maguire) or Kevin O’Connor, that would be fantastic.”

“I always felt from the cup final last year we always had the confidence (to win the league).” said City boss Caulfield long after celebrating supporters had left the pitch. “To lose three players including an Irish International is difficult, and goals did dry up.

“I’ve been around the club a long time and know the expectations, I understand the enthusiasm from the supporters, but when you read you’re champions-elect in August it does affect players.

“We’re the biggest club in Ireland by a long shot, Rovers have trophies and history which is rightly recognised, but in terms of support and coverage, we’re the biggest. I’ve got phenomenal support across the city and county, for me tomorrow it’s about meeting the family and neighbours, and putting a smile back on the face of the supporters.”

The hosts showed little signs of the apprehension that stifled them the previous Friday against Bohemians in the opening moments; whipped crosses causing difficulties for the Derry defence. But for the Candystripes, chasing a solitary point themselves to secure European football next season, there could be little complaints about how they were handling their business.

In fact, Kenny Shiels’ men were causing their own trouble on the counter, the ever-industrious Barry McNamee robbing Stephen Dooley and transitioning quickly to Ronan Curtis, whose flat chip forced Mark McNulty to tip over. It was the set-piece where the visitors looked most dangerous, and after Aaron Barry missed a free header outside the front post, Harry Monaghan couldn’t control his header from close range, blasting over to the host’s relief.

Little in the way of clear opportunities for the hosts, despite their dominance of possession; Buckley’s tame free-kick easily held by Derry goalkeeper Ger Doherty, who had to be alert to fist away Stephen Dooley’s curling effort just before the interval.

A drawn-out second period had all the hallmarks of two teams happy to settle for their point, and despite the introduction of Kieran Sadlier livening up the contest for a few minutes and a half chance for Jimmy Keohane, a scoreless draw that satisfied both parties was never in doubt.

1 CVC cuts Six Nations offer by half to €165m as talks continue on new deal
2 Jack Charlton era made GAA sit up and realise its greatest strength
3 Game Changers: Living beyond fear puts Alex Honnold above all others
4 Georgia and Fiji in line to join Six Nations sides in eight-team tournament
5 Game Changers: Gary O’Toole took a stand when others turned their heads
Real news has value SUBSCRIBE