Liverpool throw off the shackles with record rout

All too easy for Jürgen Klopp’s Liverpool side in Slovenia 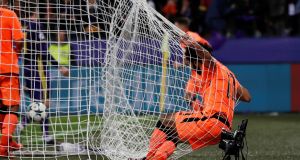 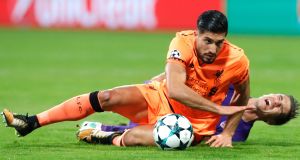 Liverpool’s Emre Can in action against Maribor. Photograph: EPA

With the notable exception of José Mourinho’s stifling tactics at Anfield it had always seemed a question of when, not if, Liverpool would polish their performances with a finishing touch. The answer arrived in emphatic style in Maribor, where Jürgen Klopp’s side recorded the biggest away win in Liverpool’s rich European history and ignited their Champions League campaign.

A run of one win in eight matches before the visit to Slovenia had tested Klopp’s humour but not his conviction that Liverpool are “on a good way” and more assured than recent results had suggested. Seven unanswered goals away from home in the Champions League would support that belief. Roberto Firmino and Mohamed Salah both scored a double while Philippe Coutinho, Alex Oxlade-Chamberlain, with his first Liverpool goal, and Trent Alexander-Arnold were also on the scoresheet as Klopp’s team climbed to the top of their group.

Liverpool’s impatience for a first win in the group stage was undisguised. It was evident in Klopp’s pre-match press conference when he spoke of making amends for the points dropped against Sevilla and Spartak Moscow. It was clear in a team selection that showed no sign of complacency against the Slovenian champions, the lowest ranked team in the group, as the Liverpool manager fielded the same attack who faced Manchester United on Saturday. And it was demonstrated in a commanding, clinical performance that overwhelmed Maribor from the first whistle.

The perfect way to release the frustrations of the dour United stalemate and the perfect opponent, it has to be said.

Firmino started the torment for Maribor by tucking home his first goal in six games in the fourth minute. The Brazil international had forgotten his security pass on the way into the stadium and was sent back to the team bus to retrieve it by a sharp-eyed steward but he had no problem locating weaknesses in the Slovenian club’s defence. Salah and Coutinho enjoyed similar success against a regularly exposed rearguard and it was the hero of Egypt who instigated the breakthrough when he broke away from Marko Suler’s lunging challenge on the right wing. Salah sprinted on, picked out Firmino unmarked in the centre and the forward converted from close range.

Number two followed quickly and this time Firmino was the instigator. He spun away from his marker in the centre circle and found Salah with a fine cross-field ball. Salah fed James Milner, recalled on the right of the midfield three, with Jordan Henderson rested, and he crossed for Coutinho to sweep a first-time finish beyond Jasmin Handanovic from 12 yards. Milner has found opportunities limited this season but he seized one here, driving at Maribor and providing an accurate range of passes throughout.

Firmino created the third, too, returning the favour for Salah, whom he released behind the Maribor defence with a perfectly weighted ball, having ridden several challenges in the buildup. Liverpool’s summer signing beat the advancing Handanovic with a measured, angled finish and the visitors were home and hosed with 70 minutes left to play.

But there was no let-up in their work-rate or adventure. The combination of Coutinho’s craft and Alberto Moreno’s pace on the left troubled Maribor regularly, the full-back striking the side netting from one chance created by the playmaker, and it was that source that provided Liverpool with their fourth. Moreno crossed hard and low from the byline having been released by Coutinho and there was Salah to tap into an unguarded net.

Darko Milanic, the Maribor coach who lasted 32 days as manager of Leeds United under the former owner Massimo Cellino, was apoplectic in his technical area but there was nothing he could do to stem the onslaught. It could have been much more, too. Firmino flicked wide from a Milner cross, the midfielder tested Handanovic from the edge of the area and Coutinho forced him into a decent save. Maribor’s first effort of note arrived in the 28th minute with a routine save for Loris Karius from Aleksander Rajcevic. When they did have a chance to restore some pride Suler headed wide wastefully having been found unmarked at the back post from a free-kick.

Maribor have conceded only four goals in 10 domestic home fixtures this season but they continued to be ravaged by Liverpool en route to their heaviest European defeat. Firmino scored his second of the night when he met Coutinho’s free-kick with a glancing header that sailed across Handanovic and inside the far post. He and Salah departed to well-earned ovations from the travelling Liverpool supporters and it seemed almost cruel of Klopp to introduce Oxlade-Chamberlain and Daniel Sturridge from the bench.

Sturridge sent the former Arsenal man clean through on goal and he opened his Liverpool account with a measured finish before Alexander-Arnold’s deflected drive completed the rout.