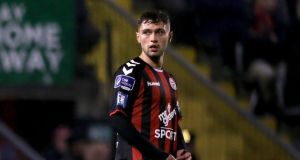 Despite the biting cold, some 2,225 turned out for Tommy Barrett’s first home game as manager of Limerick but were left disappointed as Bohemians snatched a draw in the final minute.

The outcome means the sides remain unbeaten after two rounds but both will have to show major improvement if they are to make it into the top four.

The first half was particularly disappointing. After forcing a few early corners, Bohemians looked the better side and almost took the lead when an angled shot by Keith Buckley forced a brilliant save from Brendan Clarke.

The visitors had another excellent chance in the 57th minute when Buckley turned provider for Paddy Kavanagh who shot wide.

That was punished when, somewhat against the run of play, Daniel Kearns started a Limerick passing sequence which ended with Cian Coleman getting the vital last touch.

Oscar Brennan went close for Bohemians and Coleman was unlucky not to have wrapped it up for the home side but with only goalkeeper Shane Supple to beat from a couple of yards the ball took an awkward bounce and the chance was lost.

In the 90th minute Bohemians got the reward they deserved when Eoghan Stokes headed past Clarke.