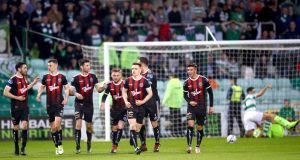 There was already something quite remarkable about the run that Bohemians were on against their cross city rivals as they came into this game, but the manner in which they extended their unbeaten run to six wins and a draw made almost everything that had gone before seem a little run of the mill.

For Rovers what unfolded in front of a crowd of 6,414, their biggest league attendance since they move to Tallaght, was some sort of strange nightmare. Their visitors will hardly have arrived full of fear but through the early stages the whole occasion seemed set to exceed their wildest dreams. Though the second half was quiet by comparison, it still ended satisfactorily enough.

There is the victory itself, of course, but the manner of it clearly generated a very special kind of glee amongst the Bohemians fans who celebrated it wildly in the stands. There are also the two sendings-off; setbacks that left Stephen Bradley’s side in a near hopeless position before the break and which will still serve to handicap them again come Friday when they must head to Oriel Park.

The sense of mutual enmity between the two sets of supporters is to be expected on these nights; on the ones when it doesn’t spill over, it is a big part of what makes them special. For the part he played, though, referee Paul McLaughlin was attracting a fair bit of hostility from the home support by the break.

The straight red he had shown Trevor Clarke for a tug on Danny Grant and second yellow handed to Lee Grace, mistakenly it seemed, for handball, were the most critical calls but the latter came with the added bonus of the penalty Bohemians felt they should have had first time round. When Dinny Corcoran pushed the ball home after Alan Mannus had initially saved, the locals were left needing to produce something miraculous if they were to preserve their seven point advantage at the top of the table.

They managed a couple of chances during what was, in the circumstances, a strong second half but they couldn’t score. Their lead is now down to five, with their arch rivals heading up a chasing pack, all of which has an extra game to play. Surely the only thing more far-fetched than their run of recent results against Rovers would be the current Bohemians side, one that had to be rebuilt by Keith Long over a winter in which key players were lost, mounting a sustained title challenge during the months ahead.

The opening stages here suggested a side with few reservations about their own ability to do it. Rovers started as though they expected to dictate the pace and pattern of the contest but repeatedly found themselves on the back foot, unsettled by visitors who gave them neither time nor space in which to play and forced errors in areas of the pitch where few teams have even tried to exert pressure on the league leaders this season.

Danny Mandroiu was at the heart of the attacking side of things for Bohs and if Corcoran seemed to struggle with the split second nature of the early chances that came his way, he was certainly sharp enough to pounce on the penalty rebound; the second time he has scored the decisive goal in games between these two this season.

Whether Long’s young side really could have retained their early edge against 11 men would have been fascinating to see. James Talbot had to save well from Aaron McEneff early on and it had seemed inevitable that there would be more to come from the locals over the course of the 90 minutes.

As it was, Bohemians struggled to drive home their advantage against nine players over the course of a second half in which Rovers, playing a 4-3-1 formation that featured rotating fullbacks, showed tremendous spirit. Dan Carr forced another decent save and Roberto Lopes narrowly missed the target when Talbot looked helpless.

Bohemians had enough about them to see it out, though, and even went close a couple of times to doubling their lead. For Rovers, the challenge now is to show in Dundalk on Friday how well they can pick themselves up from the defeat.