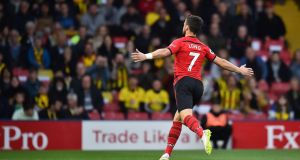 Southampton made the brightest start to a game in Premier League history here, but their wait to secure top-flight survival still drags on and on. This had seemed like their moment, the visitors having scored from Watford’s kick-off courtesy of Shane Long, a striker suddenly prolific, before carving out the better opportunities through the contest which ensued. Then, just as caution set in late, they were hauled back at the death.

Andre Gray equalised 25 seconds from the end of normal time, book-ending a frantic contest in the process, with the draw hoisting the FA Cup finalists into seventh place. But the sense of regret lingered with Southampton. The gap from the bottom three has stretched marginally to six points, and that may still prove enough to complete Ralph Hasenhüttl’s salvage operation, but angst will remain for the weekend visit of Bournemouth. The visiting players looked crestfallen at the final whistle, for all their Austrian manager’s attempts to raise spirits. There is work still to be done.

It was the barely believable opening that inevitably drew the focus, the visitors establishing their lead with the sixth touch anyone had mustered. There was a pass slid matter-of-factly by Roberto Pereyra from the centre-spot and a casual control from Craig Cathcart, deep inside Watford territory, which probably left the ball marginally under his feet. Even so, the centre-half would not have envisaged Shane Long sprinting at pace to charge down his attempted clearance, and was caught on his heels as the ball rebounded kindly into space.

Shane Long has just scored the quickest EVER goal in @premierleague history! 😳🔥

The striker galloped on to it unchecked, prodding the loose ball on and then clipping it over the advancing Ben Foster from just inside the penalty area. His celebration, arms held wide and hint of a salute, was that of a man who could hardly believe his luck. It was officially timed at 7.69 seconds, comfortably beating Ledley King’s 9.82 seconds previous record against Bradford City back in December 2000. What was more remarkable still was that Long, a player who once went 1,320 minutes without a Premier League goal, had now scored three in four games. John Barnes took the microphone at half-time and performed a karaoke version of Rocket Man. There were times when none of this felt real.

As ruthlessly pilfered as the goal had been, it was also a freak start to a crucial match for Southampton, whose pace and incision had unnerved Watford through a rip-roaring opening period.

Twice they struck the outside of a post, first through the excellent Nathan Redmond after a smart save from Foster, and then by Ryan Bertrand as he capitalised on the winger’s cross and Long’s flick. The striker was playing like a man possessed, his assured collection under pressure in the buildup to Redmond’s chance reflecting a player whose confidence has suddenly soared. He probably should have added a second, first nodding James Ward-Prowse’s cross wide and then Redmond’s centre over the bar.

Cathcart, clearly shaken by that uncharacteristic early error, never recovered his poise and was replaced at the interval with Javi Gracia, unimpressed by so much he had witnessed, tweaking the team’s formation. Watford had been rather panicked by it all, authority having drained early from midfield – both Etienne Capoue and Abdoulaye Doucouré were booked – and their passing was too erratic for comfort.

Gray might have forced them level within three minutes of Long’s goal, but he lacked the Irishman’s composure to convert Will Hughes’s cross before nodding the rebound from Angus Gunn’s save over the bar. Only the slippery Gerard Deulofeu was consistently brimming with menace, whipping a shot marginally wide of a post before spinning sharply into space to fizz another attempt just beyond an upright.

In that context, and with the FA Cup final next month, the sight of the forward limping after a heavy Jack Stephens challenge must have perturbed the majority present. The Catalan, visibly frustrated at his inability to force his team level, ended up shoving Stephens into an advertising hoarding and was booked with local exasperation mounting.

Too much of their play had been frenetic and shapeless, as if individuals were desperate to conjure something remarkable to secure their place at Wembley, and it was only when Southampton, sensing victory, retreated too deeply as the clocked ticked down that the hosts exerted proper pressure. It duly yielded reward. Pereyra had already forced Gunn into one fine reaction save to push away his close-range attempt when, with the visitors heaving to clear their lines, the ball broke kindly to Gray who lashed it high beyond the goalkeeper via a deflection from Maya Yoshida. - Guardian