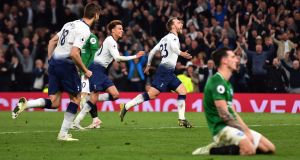 Amid all of the excitement at Tottenham’s upcoming Champions League semi-final against Ajax, it has been possible to forget that their target for the season remains a top-four finish in the Premier League. There was no room for a slip-up against Brighton, no scope for their focus to drop and, on a night of high tension, they got the result that they wanted. Yet how late they left it.

There were 88 minutes on the clock when Christian Eriksen got on the ball, in the area in front of the Brighton area, as he had done all evening, probing for the solution. It had previously eluded him with a grinding regularity but on this occasion he arrowed a low drive that ripped past his defensive shackles and found the bottom corner. Cue delirium. Spurs remain on course and their record at their new stadium remains unblemished; four wins from four matches and no goals conceded.

It was so cruel on Chris Hughton and his Brighton battlers, particularly the centre-halves Lewis Dunk and Shane Duffy. The former sank to his knees when Eriksen’s goal went in; finally beaten. Brighton must go back to March 9th – and 660 minutes of football – for their last goal in the Premier League but this looked like being a night when what they did at the back would fire their survival hopes. But for Eriksen, it would have done.

Brighton had started the day in 17th place, three points clear of Cardiff – who had played one game more – and under no illusions about the size of the task that confronted them. Their home match against Newcastle on Saturday already felt like a massive one because after that, they finish the season with a visit to Arsenal and a home fixture against Manchester City. The fear for them is that Cardiff might get something from their upcoming games against Fulham (away) and Crystal Palace (home).

Chris Hughton’s 4-3-3 was configured to become 4-5-1 when required – which was regularly – and it was noticeable that the Spurs fans booed Mat Ryan, the visiting goalkeeper, as early as the 10th minute for taking his time over a goal-kick. The onus was on Spurs to make the game, to find a way through Brighton’s tightly marshalled lines and Pochettino took no chances with his lineup, which he built around a back four and was pretty much as strong as he could have picked.

It was plain at the outset that Spurs had to be quick with their passing and sharp with their movement because Brighton’s determination was ferocious. When Dele Alli burst away from Martín Montoya and Alireza Jahanbakhsh midway through the first half, he ushered in Son Heung-min on the edge of the area. But Brighton quickly flooded the space in front of him and the opening came to nothing. The incident was emblematic.

Brighton put their bodies on the line as they sought to protect the clean sheet, none more so than Dunk, who made some colossal interventions, and it was rough and ready, at times – witness Jan Vertonghen’s elbow on Florin Andone in the 25th minute. Vertonghen did not throw it; rather, he levered it into his opponent. The referee, Christopher Kavanagh, took no action.

Andone diced with disaster. Booked a little harshly for a trip on Danny Rose, as Kavanagh tried to assert his authority, the Brighton striker stamped into a tackle on Kieran Trippier in the 36th minute, missing the ball and catching the Spurs full-back. It looked like more of a yellow card than the one he had just received but Kavanagh disagreed.

Where was Spurs’s invention in the first half? Alli took a marvellous touch on a high ball and prodded goalwards on 45 minutes, beating Ryan but watching Duffy clear off the line but, that apart, the pickings were slim. Vertonghen also saw Dunk block a shot from him at close quarters.

Hughton could be happy at the interval because Brighton had flickered on the counter. Andone powered forward on a one-man break only to be halted by a superb slide challenge from Rose, while he stretched but could not reach a low Jahanbakhsh cross.

Zac Efron brought a touch of glamour from up in the stands – the actor was picked out by the TV cameras; he put on a Spurs shirt in the second-half – yet it was attritional fare on the pitch, with the whistles for Ryan’s delaying tactics increasing in volume in the second-half. Toni Jiménez, the Spurs goalkeeper coach, who would never have done that sort of thing during his playing days, tapped his watch and yelled at the officials. Duffy headed at Hugo Lloris from a tight angle following a free-kick but the pattern became entrenched: Spurs pushing, Brighton resisting. There were lengthy periods in the second half when Lloris was the only player outside of Brighton’s defensive third. With so much on the line, it was gripping stuff and the home crowd alternated between shouting their encouragement and howling in frustration.

The margins were agonisingly fine. Toby Alderweireld spun and got off a shot that hit the inside of the post and rolled across goal but Spurs could not force it home and there were other chances. Rose had a dipping shot tipped over by Ryan while Alli, Son and Trippier went close. Eriksen would find a way through. - Guardian