Brendan Menton: FAI at a crossroads and next move critical 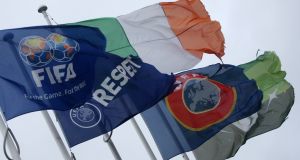 This is the conundrum facing Irish football.

Fifa rules stipulate that its members must be independent and free from government interference. Any action by the Government to force change would lead to an immediate suspension of Ireland from all international football activities, including its underage teams and its clubs. It would lead to a suspension of funding and that would have a disastrous impact. This must be avoided at all costs.

There has been a systematic undermining of policies and procedures in the FAI in recent years. The FAI board has allowed itself to be emasculated. The FAI’s governance and financial controls are a shadow of those that existed previously.

The current FAI rules, adopted in February, are totally inadequate. The role of the chief executive is undefined. Decision making authority is unclear. The rules provide carte blanche for the chief executive. This dates from the Genesis Report in 2003, which blurred the distinction between executive and administrative responsibility. The chief executive became a voting member of the board, which is unique in football associations and against Fifa guidelines. The size of the board was reduced, which allowed a small Delaney-led cabal to dominate. Dissent was dispelled and information was controlled.

The directors and the members of the Finance and Legal Affairs Committees must all be held equally accountable. They have a fiduciary responsibility to ask questions and get answers. That is their role. Ignorance is no excuse. They cannot remain.

Financial control policies have also been changed. I give two examples from the many possible.

1. How could the Honorary Treasurer not be a signatory on the €100,000 cheque repaying Delaney’s loan? Was this in accordance with the bank mandate?

2. Who changed the previous policy, which forbade personal expenditure on FAI credit cards?

I am fearful for the financial stability of the FAI. It has large bank debt and possibly other major creditors. Significant income has been suspended by Sports Ireland. A head in the sand attitude is not acceptable. If the FAI encounters additional financial difficulties, it will be the staff and grassroots programmes that suffer and not the banks.

I am amazed that the Sunday Times exposé of April 14th on the ticketing agreements between the FAI and Marcus Evans Ltd has received so little attention. Giving 12.5 per cent of away match tickets and 25 per cent of European Championships and World Cup tickets to a corporate hospitality company is a breach of trust with the Irish fans. Space prohibits me from expressing the degree of my anger at this.

I am critical of Sport Ireland on two accounts: the obvious signals they missed of the deteriorating financial and governance situation in the FAI; and what I understand to be their pathway for FAI reform.

Surely the fact that the FAI asked for advance payments of funds on a number of occasions was a signal that the organisation was under financial pressure. Surely the prohibition on questions at AGMs was a signal that governance had gone awry. What questions did Sport Ireland ask? Given Delaney’s renowned expertise at political schmoozing, what was the relationship between Sport Ireland and the FAI? This is a question that has not been asked. Were there elements of regulatory capture in the relationship?

Sport Ireland’s hope that FAI reform can be completed by the organisation’s AGM in July is totally unrealistic. How will all the reports and investigations be completed and assessed within that timescale? How long will delegates to the AGM get to discuss the proposals for change. Will grassroots members be consulted? If fundamental change is not achieved, then the ‘new’ FAI will come from the same strata as the old. If reform is rushed, nothing will change.

The review of governance of football in Ireland needs to be comprehensive and start at the base and include the affiliate structure and the entitlement to vote. Anything else would be designed to fail. It is impossible in the space available to outline proposals for a detailed new structure, but there are three things I would certainly like to see:

1. Football should be more democratic, with greatly increased representation of clubs at general meetings.

2. The Honorary Officers should be elected by the members and not the politically controlled FAI Council.

3. The power of cliques and cabals should be broken. The cabal of the four provincial associations allied to the Junior Council, which controls 36 per cent of votes at FAI Council, is the worst example of this. They always resist change and will be the biggest stumbling block to reform.

The key issue is how to achieve change. As stated in the opening paragraph, the power to change internally lies with the delegates to general meetings. Turkeys don’t vote for Christmas, so that approach can be immediately discounted.

Change will have to be forced from outside. Government interference brings the threat of Fifa suspension. There is another solution. The Fifa statutes (Article 8.2) state that: Executive bodies (the board) of member associations may under exceptional circumstances be removed from office by the Council in consultation with the relevant confederation (Uefa) and replaced by a normalisation committee for a specific period of time. The Council referred to here is the Fifa Council.

We have exceptional circumstances: the FAI board is under investigation for possible criminal conduct re its fiduciary responsibilities.

I make a plea to the president of the FAI, Donal Conway. Please, show leadership and in the interests of Irish football, go to Fifa, explain the situation and all the investigations and ask them to establish a normalisation committee for a period of 15 months. There are people in Ireland, such as Des Casey, Ireland’s most experienced international football legislator, who could advise Fifa on appointees.

This approach would lead to the best outcome for Irish football. The 15-month period is needed to provide the time to ensure appropriate fundamental change. With Fifa’s assistance, hopefully, a new, much changed and reinvigorated FAI can be re-established by the AGM of July 2020.

Brendan Menton is a former general secretary of the FAI (2000-02). He is also a former chief economist for AIB. A longer version of this article can be read here

1 Return of Conor Murray’s box kicking could exploit French vulnerability
2 Sam Bennett struggles as Roglic wins Stage 10 of Vuelta
3 History suggests England should keep their part of the bargain
4 France v Ireland: French player profiles
5 Hooked to a few teams but only one game
Real news has value SUBSCRIBE
Crossword Get access to over 6,000 interactive crosswords