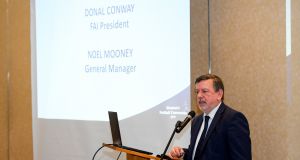 FAI president Donal Conway: “It was almost a complete majority. It was resounding and it shows that there is a real appetite for change.”

The FAI took a major first step towards implementing the recommendations of the Governance Review Group when the rule changes required to reshape the way the game is run were passed by 116 votes to just two at an extraordinary general meeting (EGM) of the association in Dunboyne on Saturday evening.

Immediately after the meeting the association’s president, Donal Conway, expressed the hope that the vote will be seen as significant in the normalisation of its relationship with government and the restoration of public funding at some point before the end of the year.

The association’s board had earlier amended the proposals by raising the age limit envisaged for membership of council from 70 to 73 so as to head off some dissent from a number of representatives from clubs and affiliates who would have had to resign. The rest of the rule changes, however, were as they had been set out last week and the margin by which the changes were passed, which was far in excess of the two thirds majority actually required, represented a significant victory for Conway who had been at the forefront of the campaign to have them adopted.

“The rules say a two thirds majority but we wanted to get what we got today. We wanted to signal that FAI members overwhelmingly back reform.”

The changes, he confirmed after the meeting concluded, mean that he will stand unopposed for re-election to the position of president next week at the association’s AGM under the new rules while vice-president Noel Fitzroy with seek to retain his position in the face of opposition from Gerry McAnaney of the Defence Forces and long time Waterford FC representative Paul Cooke.

Six other members of the reconstructed FAI board will now be elected from the newly established constituencies with the remaining positions, those set to go to independent directors, to be filled after the new “nominations committee” has been put in place. Aidan Horan, the chair of the Governance Review Group, who attended the EGM in Dunboyne, said that being able to proceed with the establishment of that new board was a key element of the reform process as he envisaged it.

Conway acknowledged that there is still some way to go before the association regains the trust of Sport Ireland and the government but he said that he had spoken to John Treacy immediately after this meeting. “I didn’t say to him ‘turn on the tap now,” but I did want to make him aware that we had taken this step.

“There is very much a sense that this is stage one on a journey,” he said before suggesting that he envisages that journey to be eventually completed at the association’s 2020 AGM in the summer of next year.