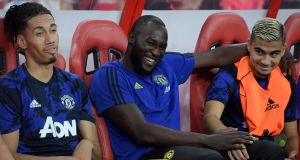 Just two years after joining the Old Trafford giants, the 26-year-old is keen to move onto pastures new and Antonio Conte is keen to bring the striker to Serie A.

United received a €60 million bid from Inter two days ago, which was rejected out of hand as it falls well short of their valuation.

The two clubs met for an International Champions Cup clash in Singapore on Saturday, but Lukaku watched from the sidelines due to his latest knock.

On the eve of the match, Inter head coach Conte confirmed his desire to sign a player he missed out on when Chelsea boss in 2017.

“I think frustrated is a big word,” he said in English when asked about the inability to complete a deal.

“Lukaku is a United player and this is the reality. You know very well that I like this player, but also in the past when I was Chelsea’s coach and I tried to bring him to Chelsea.

Pushed on Inter’s interest in him, Conte said: “I think that at this moment, I repeat, we’re talking about a player of another club.

“For this reason, I think that it’s right (we) don’t talk about Lukaku because I have great respect for United.

“As I said before, for sure, I like this player and I consider him an important player for us to have a good improvement. But, at the same time, there is a market, a transfer market.

“We know very well which is our situation at this moment. We’ll see, we’ll see what happens but now, for sure, Lukaku is a United player.”