‘We wanted to signal that FAI members overwhelmingly back reform’ 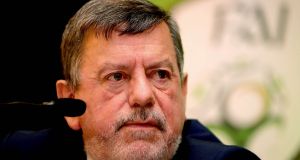 Donal Conway hailed the decision of Saturday’s egm of the FAI in Dunboyne to overwhelmingly back the rule changes required to implement the recommendations of the governance review group as a clear indication of the membership’s “real appetite for change, its real appetite for reform to start”.

But there were some not quite so convinced in the wake of the 90 minute meeting. The margin involved, 116 to two, is clearly a significant success for the 65-year-old Conway who had spent a deal of time and effort on persuading the grassroots to back the thrust of the report’s 78 recommendations.

Afterwards, there was some talk too of side-deals being done involving places on some of the committees to be formed under the new rules.

At this stage, though, Conway’s position and his own confidence in it appear to have been strengthened with the former schoolteacher making it absolutely clear he intends to allow his nomination for another year as president to proceed to the floor of this Saturday’s agm in Trim.

That attracted renewed criticism from Shane Ross on Sunday with the Minister describing the decision as “mind-boggling”, something that may well have implications for Conway’s expressed hope that the restoration of government funding might start as early as October or November.

Ross’s reaction came in an article he wrote for the Sunday Independent while The Sunday Times revealed further detail of the events that led to John Delaney’s departure from the organisation on “gardening leave”.

Not much reflected well on the FAI directors, including Conway who, it is reported, was delegated along with former honorary secretary Michael Cody to agree “a package” with the then CEO to facilitate him take up the newly created role of executive vice president.

Current FAI vice president, Noel Fitzroy, who is also standing for re-election this weekend, is reported to have told a board meeting that he “often looked at Delaney and wondered how he got everything expected of him”.

Of more significance, are the suggestions that €100,000 of the association’s money was paid to Delaney’s personal solicitor, Paddy Goodwin, and that its head of security, Joe McGlue, sent an email in which he claimed the Gardai were attempting to hack a WhatsApp group established by supporters of the national team who were critical of Delaney.

The association declined to respond to queries from the Irish Times relating to these or other matters contained in the article. The thinking is presumably that the matter will blow over; an approach that seems to have been at the heart of the association’s media strategy over the past three months but which does not seem to have gone especially well for it.

Conway, though, survives and portrayed the outcome of Saturday evening’s meeting as a significant success.

“The rules say a two-thirds majority [was required] but we wanted to get what we got today,” he said. “We wanted to signal that FAI members overwhelmingly back reform.”

The majority of departing delegates described the meeting as having been “positive” and the near unanimous nature of the vote suggests that the business of the AGM will go smoothly for the leadership.

The ongoing stand-off with the Minister remains a problem, though, with Ross rejecting the suggestion of being the sort of “political interference” that might justify an intervention by Fifa.

On Thursday, the day before the FAI revealed both Fifa and Uefa had written to it setting out their rules in relation to such things, Conway had said a Government funding or not funding an association was fine, as he understood it, but that linking funding to regime change was not.

The Minister clearly disagrees and it would seem remarkable if he continued to fund of a body whose leadership he had no faith in.

The FAI would still, of course, be free to make a call on whether to press on regardless. But if push comes to shove it would be quite something if another year of Conway’s presidency ends up costing the association €2.9 million.

1 Gerry Thornley: Ireland don’t want to box themselves into a corner
2 Owen Doyle: Ireland suffered from officiating of the breakdown
3 Kevin McStay: Maybe a knockout All-Ireland Championship is the long-term solution?
4 Dublin’s monopoly an increasingly difficult problem for Leinster Council
5 The Offload: Ireland are stuck in no man’s land
Real news has value SUBSCRIBE
Crossword Get access to over 6,000 interactive crosswords