Continuity the key for Mick McCarthy ahead of Gibraltar 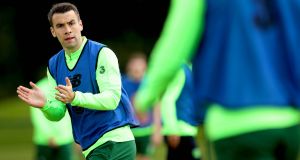 The Irish line-up will be largely unchanged for Monday’s European Championships qualifier against Gibraltar according to Mick McCarthy, who has everyone bar Alan Judge and Kevin Long available to select from going into the game.

“I don’t get the sense that there should be wholesale changes,” he said after the squad trained at Abbotstown on Sunday. “The lads have won two games, drawn one and played ever so well. And we need to beat these guys.

“I’m not saying I won’t make changes but you know that way when you play well and you win. . .it’s hard (for the players) to get out of it. It’s their job to stay in it. So, unless I think someone is knackered . . . Continuity is excellent, a really good thing; playing the same team if you can. It’s not as if we’re playing 46 games and having to rotate.”

Judge, he said, had returned home and after attending a wedding on Sunday, the midfielder will undergo surgery on the broken wrist he suffered in Copenhagen. Long is also out of contention to feature with a calf strain but everybody else took part in training.

McCarthy said he was more than happy with the way things turned out against the Danes but when pressed for a part of his side’s performance that he believes might be improved upon this time out, he admitted he would like to see the players retain possession a little more effectively.

“When we win the ball back high up the pitch, it would be good if we do a bit better with it and not give it back to them which we did a bit in Denmark the other night,” he said. “I don’t know if that was down to a rush to score a goal but you need to go from that crash bang wallop mentality to get the ball back to getting the pulse rate down and passing the ball to each other. We did the first bit well but the second bit was not the way I would have liked.”

The manager has hinted that he will stick with the same system employed against the Georgians and Danes but may look to give at least a little game time to some of the players who have impressed in training over the last couple of weeks. Callum O’Dowda, he suggested had done increasingly well since joining up with the squad and, he believes, would grab the opportunity to play while Josh Cullen might yet get to make his senior international debut. The simple problem is that those selected ahead of them for recent games have done well enough in the manager’s eyes to merit retaining their places.

“Josh has been excellent,” he says, “and had made a really valid case to get a game. But you could argue that the midfield players have been as good as any part of the team. Glenn (Whelan) has been excellent, Conor (Hourihane) scored a winner and so did Jeff (Hendrick).

“Making a case for him is fine but you’re making the case against some very good players. Callum has done really well since he has come in too, he has been getting better and better; he just need an opportunity but unfortunately that opportunity hasn’t come.”

This, he insisted, is not an occasion for needless experimentation. “I know I’ve only been back for three games but I’ve had something like 967 as a manager. I’m fully aware how tough these games are. I know it’s a long time since I did international management before but I’ve never forgotten that every single game is a tough challenge.”