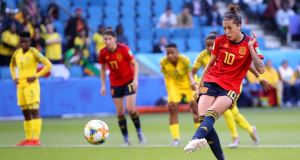 Jennifer Hermoso netted two second-half penalties and substitute Lucia Garcia added a last-minute goal as Spain came from behind to beat South Africa 3-1 at the women’s World Cup on Saturday.

Hermoso tucked away spot-kicks in the 69th and 82nd minutes to give Spain a winning start to their Group B campaign after South Africa, in their maiden appearance at the finals, took a surprise first-half lead.

The first penalty came after a handball by South Africa captain Janine van Wyk and the second after follow through tackle by full back Nothando Vilakazi on Garcia which earned Vilakazi a second yellow card and a dismissal.

South Africa were on for a shock win after Thembi Kgatlana struck a powerful shot from the corner of the penalty area over the head of Spain goalkeeper Sandra Panos in the 25th minute.

The goal came after the South Africans had weathered Spain’s early dominance with desperate defending and then began to look threatening on the counter-attack.

African Women’s Footballer of the Year Kgatlana could have made it 2-0 but fluffed a tap-in opportunity at the back post in the 57th minute, not long after Hermoso had come close to an equaliser by striking the crossbar.

But Spain’s superior fitness saw them dominate the last half hour and there were other chances for a more commanding scoreline.

Garcia’s goal came from a ball straight down the middle of the pitch as she outsprinted the defence.