Justin Edinburgh dies at the age of 49 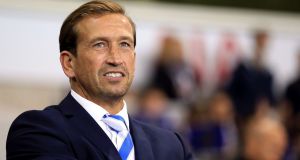 Leyton Orient manager Justin Edinburgh has died at the age of 49 after suffering a cardiac arrest.

The club announced Edinburgh’s death in a statement, saying the former Tottenham defender had died on Saturday, having suffered the arrest on Monday.

“We are completely heartbroken by this tragedy,” said Leyton Orient chairman Nigel Travis.

“All our thoughts and love are with the Edinburgh family and we know from the messages that have flooded into the club over the last week that the wider football world will share our sentiments.”

Edinburgh had just guided Orient to promotion back to the English Football League, after taking over in November 2017 as the club began an extensive rebuild.

“The success that Justin brought to Leyton Orient was incredible, but more importantly the impact he had on us all as a winner and a wonderful, inspirational human being will be his legacy and will stay with us forever,” Travis added.

As a left-back, Edinburgh made his name at Tottenham, making more than 250 appearances in a 10-year stay at the club, winning the FA Cup in 1991 and the League Cup in 1999.

“We are deeply saddened and shocked to hear of the passing of Justin Edinburgh,” Spurs said.

“Our heartfelt condolences and thoughts go out to his family and friends at this terribly difficult time, as well as everyone that worked alongside Justin at Leyton Orient.”

Edinburgh was in Madrid last weekend to watch Spurs as they were beaten 2-0 by Liverpool in the Champions League final.

Edinburgh also played for Portsmouth and Billericay, having started his career at Southend.

As a manager, he had spells at Billericay, Fisher Athletic, Grays Athletic, Rushden and Diamonds, Newport, Gillingham and Northampton before taking over at Orient.

Wilkinson said he was “a hardworking man who became successful as a player at the highest level of the game and turned his love of football into a life-long career as a coach and as a manager.

“At a time when he should be celebrating the success of his team and preparing for the rewards of league football next season, he has been lost to the game and to his community too soon.” – PA