Matt Doherty out of N Ireland and Denmark matches 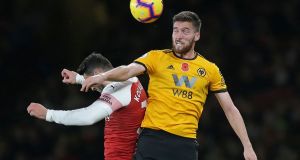 Matt Doherty has been ruled out of Thursday’s friendly international against Northern Ireland with a facial injury while Alan Browne remains a doubt for the game with a shoulder problem. Martin O’Neill however says he is happy with his options, especially on the right side of his defence where Seamus Coleman is set to reclaim his place.

The Donegalman won’t get the captain’s armband back, not before kick-off anyway, with Glenn Whelan set to lead the team out on what will be his 85th and last international appearance even if the Dubliner is adamant that he will always be available to line out for Ireland.

“Obviously the manager has been trying to bed new players in and I’m more than happy with that,” said the Aston Villa midfielder. “I know tomorrow is going to be my last game for my country in terms of ‘retirement,’ it’s not something I would do. I never picked when I came to play for Ireland and I’m not going to pick when not to. He (O’Neill) knows that if anything ever happens . . .”

Sitting beside the 34 year-old at the pre-match press conference after the squad trained at Abbotstown, O’Neill paid tribute to the former Manchester City and Stoke City midfielder, saying that while he has been omitted in recent times due to his age, he has been missed at times.

“He’s getting a bit older, as we all do, and there are other players coming in, looking to take his place. He staved the challenge off for a while because of his determination and (more recently) I think there have been some of those games where we have missed his influence.”

Whelan, whose son will be a mascot for the game with the rest of his family in the crowd, said he had no complaints whatsoever. “To get one (cap) was a great achievement; if you had offered it to me as a I never ever thought that I would get 85.”

O’Neill, meanwhile, suggested that Southampton striker Michael Obafemi could be involved in Thursday’s game but all but ruled out the possibility of the 18 year-old playing any part in Aarhus where his participation would remove any possibility of a future change of international allegiance.

“I’ve spoken to him and I think he’s really enjoyed the training,” the manager said. “He has certainly enjoyed it but I think in terms of a decision that ties him down, that’s some way off.”