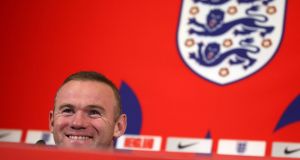 Wayne Rooney: “I’ll take away being the record goalscorer and representing my country 119 times and feeling immense pride at having done that.” Photograph: Nick Potts/PA

This is a player who had grown used to lugging the weight of expectation during an England career that will extend to a 120th cap tomorrow. Yet the late cameo the DC United striker enjoys against the United States on his first appearance for the national team in 734 days will be different.

For Rooney, this may be a throwback. A chance for the world to recall the tearaway who ripped into Turkey at the Stadium of Light on a first competitive start, or rampaged through all-comers so startlingly en route to the quarter-finals at Euro 2004 in Portugal.

At 33, the body will inevitably lack the energy of youth but the mind will be free. Liberated.

It may be the perfect way to go out because, as he readily conceded, there were times when things were far from enjoyable. “There were maybe times when I didn’t enjoy it as much as I should,” he said.

“That was down to the pressure I put on myself which, obviously when you’re in that mode, you don’t want to admit is there. I’ve stepped back from that now and can analyse it, and see it was there.

“It makes you try too hard, makes you anxious, so you don’t enjoy it as much as you should. It affects your performance, because you play your best football and put in your best performances when you’re enjoying playing. And I’m going to enjoy Thursday.”

Rooney returned from the US to discover some observers, including plenty of former internationals from Peter Shilton to Stuart Pearce, questioning why a preparatory friendly three days before a Nations League match against Croatia is to be transformed into the Wayne Rooney -Foundation International.

The recall has devalued the occasion they said, for all that the charitable collections outside the stadium are to be welcomed. The former captain, fresh from two training sessions with a vibrant young squad, was diplomatic when contemplating an occasion 12 months in the making.

Everyone, he said, is entitled to their opinion.

“But whether people agree with it or not, it’s something that’s happening,” he added.

“A lot of the older players, players who won the World Cup, weren’t treated as well as they should have been. As a country, we haven’t done anything like this before. It’s the first time. I hope, in 10 or 15 years’ time, we’re sat here for someone like Harry Kane. The FA are trying to move in a different direction and celebrate the players who have made an impact for their country.”

There was a passing denial he had gatecrashed that wedding at the team hotel in November 2016, the day after he had won his 119th cap in a victory over Scotland, and a reminder that Gareth Southgate “did pick me again, actually” after the incident.

“Also, if I was in a position where this game was going to take the [125-cap]record off Peter Shilton, I would never have played in the game. I would never have done that. But the game isn’t going to affect an outfield player record or Peter Shilton’s in that aspect, so we felt it was a good opportunity to say a thank you to the fans, but also to raise money for underprivileged children. It was the right decision.”

This will be it as far as his career on English soil is concerned, whether the country’s leading scorer comes on and scores a 10-minute hat-trick or barely touches the ball.

There will be no loan moves from DC United, to whom he is contracted for a further three years, back to the Premier League and no late case staked to be retained for Sunday’s game against Croatia.

Southgate will take the chance to tap into Rooney’s knowledge around the farewell. At some stage before the USA match Rooney will speak to the squad, or at least their younger contingent.

He stands by his decision to retire internationally 15 months ago but has been welcomed back into the fold with open arms, even by the manager whose desire to turn to youth effectively curtailed his career.

“A lot of the other managers didn’t really give youth the opportunity to express themselves and come into the team and have an impact, but Gareth has done that, giving them experience but also belief they can perform well and be successful for their country.

“I thought they would be good enough to have a go at a World Cup, but maybe the next one [2022] rather than in Russia. They proved me wrong on that. These players seem comfortable in each other’s company. Of the six managers I played for, while there were a few who brought in individual young players, to bring so many through as a group and have that trust in them . . . he deserves a lot of credit.

“But my time has been and gone. Some good games, some bad games. I’ll take away being the record goalscorer and representing my country 119 times and feeling immense pride at having done that.”

That tally will be swollen by one, with the youngest of his four boys, Cass, watching his father in an England shirt for the first time. No pressure indeed.