Manchester United manager Jose Mourinho responded to his side's 3-1 derby defeat to Premier League leaders Manchester City on Sunday by saying his team had paid the price for their midweek Champions League exertions in beating Juventus. 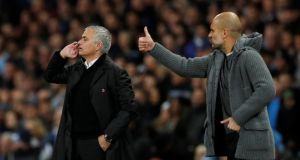 If you are still wondering why Manchester United lately only seem to start playing after they go behind, José Mourinho gave you the answer in his interview after Sunday night’s defeat in the Manchester derby.

Mourinho had been asked to assess David de Gea’s part in Manchester City’s second goal. United had been awarded a free-kick near the corner of their own penalty area after Raheem Sterling snuffed out a potential counter-attack with a foul on Ashley Young. De Gea hit a weird, low, hard free-kick towards the middle of the pitch, which Marouane Fellaini allowed to run through to Jesse Lingard in the centre-circle. Lingard’s first touch was sloppy and Fernandinho nipped in to give the ball to Bernardo Silva, who fed Sergio Agüero, who now had a clear run on the United back four. Agüero played a one-two with Riyad Mahrez and smashed the return ball over De Gea’s head from a tight angle. The replay showed how the ball had passed between De Gea’s gloves and over his head on its way into the net.

United’s goalkeeper was therefore arguably at fault both for a bad pass and an attempted save that was far below his usual standards; while Agüero’s drive was fiercely struck, it was the sort of shot you don’t expect to see go past De Gea.

But Mourinho, the son of a goalkeeper, felt the responsibility lay elsewhere. “We cannot lose the ball where we lost it. It’s not De Gea’s fault in a position where we lost with an open highway for them to go through.”

Lingard was not mentioned by name, but nine minutes later he became the first United player to be substituted. This is what happens when you are a Manchester United player who miscontrols an awkward ball 50 yards from goal that ends up in your net after four opponents have touched it. United’s players know that if they get a bad result the manager will point out the crucial mistake in public, so they better not make any mistakes. Since mistakes are inevitable, this creates an atmosphere of tension and inhibition in the mind of each player: will today be my day to go under the bus? The result is a lot of strained and risk-averse play, and the mentality only melts away when the team is losing and risk can no longer be avoided.

When Ederson’s error allowed United to get a goal back from the spot, City’s sudden anxiety was obvious. Having failed to translate their first-half superiority into more than one shot on target, the dramatic arc of the game was curving towards a United equaliser. In the end, though, Mourinho’s team could not make anything happen. Against Juventus, Chelsea, Bournemouth and Newcastle, set-pieces and good fortune had made up for the fact that United did not play much football. But in the long run you will not win many games with this method.

Asked if he felt the scoreline was fair, Mourinho replied: “If the third goal is scored in one of the moments where they were dominating I would probably say so, but it comes in a moment where we were in the fight to get the equaliser.” The third City goal came at the end of a 44-pass move, so it would be interesting to know just how dominant the opponent has to be before Mourinho accepts it is “one of the moments where they were dominating”. The United manager says that he is not one for stats. “People who don’t understand football analyse it with stats.”

It had been a difficult 10 days for Manchester City at the corporate level, and you wondered if the whirl of scandal and intrigue might rattle the team

Even a stat-rejectionist like Mourinho does know enough about numbers to understand that United’s season is now about catching up with two of Liverpool, Chelsea, Tottenham and Arsenal to force their way into the Champions League qualification spots. The gap to the top four is now a worrying seven points. The gap to Manchester City is 12 and Mourinho accepted that this gap cannot be closed this season, even if Guardiola was still pretending that since it is still only November, United still have a chance.

You could understand Guardiola being generous as this must have been one of the sweetest personal moments he has enjoyed since he came to Manchester in the summer of 2016. It had been a difficult 10 days for Manchester City at the corporate level since Der Spiegel and an associated consortium of European media outlets began reporting on the financial and legal manoeuvring which has enabled City to get around Uefa’s so-called Financial Fair Play rules, and you wondered if the whirl of scandal and intrigue might rattle the team.

Players always claim not to read the papers but, judging by their sensitivity to personal criticism, this is never really true. It may well be the case, however, that they do not read densely reported stories about financial chicanery in German newsmagazines. If they do, City’s players seem untroubled by the contents. Their record since the Football Leaks reports is three matches, three wins, 15 goals.

City are actually two points behind where they were after 12 matches last season, but the true scale of their dominance only comes into focus when you compare them to their rivals. Liverpool are making their best-ever start to a Premier League season, with their highest points total and best goal difference. And yet they still trail City, who have been missing their best midfielder, Kevin de Bruyne, for most of the season, by two points and a massive 13 in goal difference.

It looks as though they will win the league easily, and when they do this will bring renewed focus on the sources of the money that fuels their machine. But money does not decide everything. If it did, Manchester United would not be sitting in eighth place behind Watford and Bournemouth. Guardiola and his players have been brought together in Manchester by an economic process that is highly questionable. But the quality of the work they produce cannot be questioned.