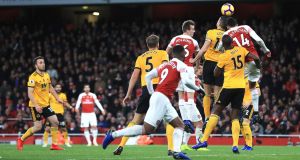 Arsenal’s Henrikh Mkhitaryan ball into the box went straight in for Arsenal’s equaliser in the Premier League game against Wolves at the Emirates stadium. Photograph: Mike Egerton/PA Wire

Aaron Ramsey thought that he had equalised before Arsenal actually did. On as a substitute, he tiptoed into a dangerous position in the 86th minute, spun and shot only for the Wolves goalkeeper, Rui Patrício, to save.

The ball went out for a corner and, for the only time all day, Wolves hesitated. And how Arsenal punished them. Granit Xhaka took it short to Ramsey, he played it back to another substitute, Henrikh Mkhitaryan and, when he was allowed to cross under no pressure and Pierre-Emerick Aubameyang made no contact with his attempted header, the ball carried on into the far corner.

Arsenal could exhale. And yet Wolves, who had already held both of the Manchester clubs to draws this season, were not finished. The substitute, Adama Traoré, was denied by Bernd Leno when he only had the goalkeeper to beat while, in virtually the last action, Morgan Gibbs-White’s rising drive from distance crashed down off the underside of the crossbar and bounced to safety.

Arsenal stretched their unbeaten sequences to 16 matches in all competitions while Wolves ended a run of three straight Premier League losses. It ended up being a thriller and one of those occasions when both teams had their grievances; their what-if moments. It was certainly the most dramatic of endings. Wolves would surely have signed up for a point beforehand. Would they have done so afterwards?

Arsenal had struggled against obdurate Portuguese opposition on Thursday – in the 0-0 Europa League home draw with Sporting – and Unai Emery knew what to expect from Nuno Espírito Santo’s Wolves, which featured five Portuguese starters, plus two more on the bench; namely discipline, competitive fire and counterattacking threat.

Wolves arrived on a losing streak but there can be no doubt they are a serious team, one that is nicely balanced in their 3-4-3 formation. The breakthrough goal came early and it stemmed from a Xhaka misjudgment yet it was underpinned by slickness.

Sead Kolasinac, who was erratic throughout, played a pass towards Xhaka that was back and across the Arsenal defensive third and the midfielder erred when he dummied it to nobody. Ivan Cavaleiro picked up possession, he rolled it wide right to Raúl Jiménez and charged past Xhaka into the six-yard box. Jiménez’s low return was well weighted; Cavaleiro finished inside the near corner.

Cavaleiro was the only Wolves player not to have started in all of their Premier League matches this season. Familiarity has bred instinctive understanding and contributed to their defensive resilience on the road. It was plain that Arsenal faced a tough challenge to turn the game around.

The half-time damage might have been heavier and it has to be a worry for Emery that Arsenal are one of two clubs in the league not to have led a game at the interval this season; Cardiff are the other.

Wolves had the big chance for 2-0 on the break in the 24th minute. The excellent Hélder Costa led it and, having beaten Rob Holding, he streaked into the area before cutting back inside Holding and shooting. Bernd Leno sprang to his right to save. He would collect the loose ball in front of Jiménez. Leno also dived to repel a Costa shot on 27 minutes.

Arsenal fired only in fits and starts in the first half. Alexandre Lacazette bought himself a yard inside the area from Mesut Özil’s cross and saw his shot superbly blocked by Conor Coady while Ryan Bennett headed a Héctor Bellerín shot that looked bound for the top corner away to safety.

Emery had to do something and he switched to a 4-3-1-2 system at the start of the second half, which allowed Aubameyang to come in from the flank and partner Lacazette up front. In the first half, Aubameyang had routinely drifted inside from the left. He did not look comfortable in that role.

The onus was on Özil to create something from his free role behind the strikers but a difficult afternoon for him was summed up by the sight of him pulling out of a 50-50 challenge with Jonny. Özil was booked for slamming the ball down in dissent and he was substituted with 15 minutes to go.

Arsenal had the chances to score in the second half before they did, with Lucas Torreira forcing Patrício to tip over a long-range fizzer and Bellerín banging high when well-placed. The big one came on 75 minutes. Xhaka and Torreira combined to release Bellerín and, when he crossed, Aubameyang had to score only to hit the post. He kicked the other one in anger.

Emery’s side had their tails up but Wolves might have made the game safe on 85 minutes only for Leno to block brilliantly from the substitute, Diogo Jota.

The equaliser would finally come but it would be the prompt for a breathless finish. Wolves could curse Leno for the manner in which he thwarted Traoré and the woodwork for keeping out Gibbs-White. - Guardian