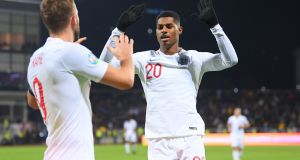 Macus Rashford and Harry Kane were facing a race to be fit for this summer’s Euros. Photograph: Michael Regan/Getty

England manager Gareth Southgate expects his side to be in a better position in a year’s time than they would have been for Euro 2020.

The summer tournament was due to begin on Tuesday but has been put back to 2021 due to the coronavirus pandemic.

“At one point we were possibly looking at being without Marcus Rashford and Harry Kane, or at the very best both of those not having a lot of football,” Southgate said on Sky Sports’ Football Show.

“Maybe some of those things will be better in a year’s time, but other teams will be in the same. I’m looking at the German league and people like (Kai) Havertz playing and their young players are going to develop as well.

“Difficult to predict, the age of the team you would hope would be better in a year’s time but we have to go and prove that on the pitch.”

With all of England’s group matches at Wembley and the semi-final and final also set to be at the national stadium, Southgate says his side will have an advantage.

“If the tournament is in the same format as was proposed for this year, and we don’t know that every city will be able to host, that is something that seems to be decided, we have an advantage in our group matches,” he said.

“But so do Italy, who play their games in Rome, Spain play in Bilbao, Holland play in Amsterdam. It’s only a true advantage in the latter stages of the competition, semi-final, final, if we are good enough to get to that point. But without doubt we have to view it positively.”

1 Game Changers: Gary O’Toole took a stand when others turned their heads
2 Chelsea talk the talk but still struggling to walk the walk
3 Georgia and Fiji in line to join Six Nations sides in eight-team tournament
4 The Offload: All eyes on Leinster’s academy intake
5 Andy Moran on moving on from a Mayo career that glowed golden to the end
Real news has value SUBSCRIBE