The club played to a cumulative market of 360,000 when they toured this summer 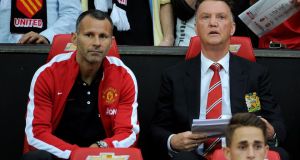 Manchester United are targeting the burgeoning US football market, with the sport there undergoing a “step-change” in popularity and commercial growth, according to Ed Woodward, the executive vice-chairman. Woodward also believes United are on the verge of “something special” under Louis van Gaal, despite managing only two points from the opening available nine and said the club had budgeted for a finish in the Premier League’s top three.

The 20-times champions enjoyed a supremely successful summer tour of America, playing five matches before an aggregate crowd of more than 360,000 fans while winning the International Champions Cup. That number included the 109,318 who saw United beat Real Madrid 3-1 at Michigan Stadium, which broke the record for a match in the country. United plan to return for next summer’s pre-season tour.

Speaking to investors after the club’s latest accounts were published, Woodward said: “I’d like to talk about the exciting emerging market that is the US. We seem to be in the midst of a step-change at the moment with football or soccer breaking into the mainstream sporting consciousness. Clearly that’s been aided by the recent World Cup in Brazil and performance of the national team there and football-themed video games.

“We played five matches there to a cumulative audience of more than 360,000. The US attendance record which we set in Michigan of 109,000 is higher than any Super Bowl or World Series in history, and was a record that had stood for 30 years.

“There are some interesting statistics that show the growing potential of the US as a market for football. American supporters bought 197,000 tickets for the 2014 World Cup, trailing only local fans. The World Cup is the most widely streamed sporting event ever in US history with over 30 million live viewing hours, over double the streaming of the 2012 Olympics.

“Manchester United was the most watched club on NBC last year despite our challenging season. We have a very strong brand in the US and as the game continues to grow we are well-positioned to benefit.”

The accounts revealed that David Moyes and his coaching staff were paid a total of £5.2m on leaving last season and United forecast the cost of failure to qualify for the Champions League under him is potentially up to £48m in lost revenue. While United earned £433m in 2013-14, the club estimate this could drop to between £385m and £395m next year.

Despite Van Gaal failing to win any of the first four matches, Woodward said: “Our budgets assume a third-placed finish, as is ordinarily the case. The 2013-14 season was a very challenging and disappointing one. But under Louis there is a real feeling at the training ground that we are at the start of something special.

“I’m confident with Louis as our manager, with a clear philosophy and a reinvigorated squad, we will get back to challenging for the title and trophies.

“Commercially we continue to go from strength to strength. The record deal with Adidas underpinned our attempts to compete for the next decade. The £750m deal is a record, not just in football but in all sports. This is the culmination of four years of hard work. We had offers from more than 20 companies around the world.

“We had a major refresh of our squad, with 13 players coming in – including six from our academy – and 17 going out, including Ryan Giggs, who joined the coaching staff.”