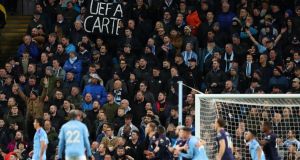 Manchester City will attempt to overturn their two-year Uefa ban from European football when a three-day hearing at the Court of Arbitration for Sport in Switzerland begins on Monday.

European soccer’s governing body Uefa ruled in February that City had committed serious breaches of Financial Fair Play (FFP) regulations and failed to cooperate with its investigation, handing them a ban and a €30 million fine.

Missing out on a Champions League season would cost City, who have denied wrongdoing, as much as £100m (€116m) in prize money and broadcast revenue, as well as matchday and other revenues.

The FFP regulations are designed to stop clubs running up big losses through spending on players.

They also ensure that sponsorship deals are based on their real market value and are genuine commercial agreements - and not ways for owners to pump cash into a club to get around the rules.

Uefa opened an investigation into City last March after the publication of ‘Football Leaks’ documents led to allegations that the club’s Abu Dhabi owners had inflated sponsorship agreements to comply with the FFP requirements.

The leaked documents included club emails which referred to money being “routed” through sponsors.

As well as questioning the nature of the documents, City have been unhappy at the way in which Uefa’s Club Financial Control Body (CFCB) conducted the investigation.

“The allegations are not true. They are simply not true,” City CEO Ferran Soriano said in a statement in February.

“We provided the evidence but in the end this FFP Investigatory Chamber relied more on out of context stolen emails than all the other evidence we provided of what actually happened and I think it is normal that we feel like we feel.

“Ultimately based on our experience and our perception this seems to be less about justice and more about politics,” added the Spaniard.

The Abu Dhabi United Group, the investment vehicle owned by Sheikh Mansour bin Zayed Al Nahyan, is the majority owner of the City Football Group, with a stake of around 77 per cent.