Tipping Point: win would put Ireland in a good position to qualify for the 2021 Euros 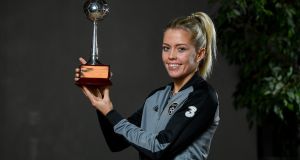 Denise O’Sullivan with the 2019 PFA Ireland women’s senior International Player of the Year award at The Marker Hotel in Dublin. Photograph: Seb Daly/Sportsfile

Momentum is a funny thing. It doesn’t always flow the way you imagined.

In the glow of the women’s hockey team’s storybook qualification for the Olympics last week, it can’t have taken much for other sports to start properly dreaming of their own possibilities.

Hockey will have its moment next year but chances are it will be a moment onto itself. With the best will in the world, hockey’s ceiling will only rise so far, at least in the short term.

That momentum has to go somewhere, though. Tomorrow lunchtime, the Ireland women’s soccer team have a real chance to stake its claim on it. Qualification for the 2021 Euros has gone perfectly to plan so far, with back-to-back wins over Montenegro and Ukraine.

If they manage to make it three from three away to Greece, Vera Pauw’s side will have made a perfect start to their campaign and suddenly the possibilities start to look open-ended.

It should be said there is a vast distance between where they are at the minute and where they want to go a little under two years from now. Germany are in Ireland’s group and have won four from four, with a goal difference of +31. They will, short of an act of God or war, finish top.

What Ireland are aiming for is to finish second. Across the nine groups, the three runners-up with the best records qualify automatically and the remaining six go into the play-off draw. A win tomorrow would put clear water between them and Greece, opening up a six-point gap after just three games.

If they manage that, they have the chance to open it up to 12 when they play Greece at home and Montenegro away in March. They don’t face Germany until April, by which time they could feasibly be well in control of second spot.

This is all rampant chicken-counting, of course. But it’s there and it’s real, a genuine shot at playing in a major tournament. If you think the hockey team’s success caught the imagination, imagine how the soccer team going to the Euros would go over. A Euros to be held in England, into the bargain.

Like any team, they are a collection of stories. Carving out a paid career in women’s football is a brutal business and they are scattered to the four winds as a result. Someone like Diane Caldwell has been all over – the States, Iceland, Norway, Germany – to make it work. Pauw’s squad has eight home-based players and the rest are in the breeze, catching on where they can.

A couple of years back, this column rang Denise O’Sullivan for a chat ahead of her move to Houston Dash. It turned out we were crossing paths during the most helter-skelter week of her life. In the space of eight days, she made her trans-Atlantic signing, was crowned FAI International Player of the Year and buried her father.

John O’Sullivan was the biggest influence on his daughter’s career and one of the last bits of news she was able to tell him was that she had got her move to play in the US, in toughest league in the game. In the horrifically short five weeks that passed between his cancer diagnosis and his funeral, her move was a small arrow of light piercing the gloom.

“When I told him about Houston, he was over the moon for it,” said told The Irish Times.

“He was calling me every day for updates on the contract situation and looking to find out if anything had happened. To be honest, I was kind of doing his head in before he died because I was starting to get stressed out over whether it would happen or not and what the contract would be like. But really, he loved all that stuff. It’s all happened at a weird time but hopefully it will work out good in the end.”

It did, but it took until the end to do so. Her first year in the States was a bust. Houston weren’t a great organisation and she got lost in the mix. But once she signed for North Carolina Courage in 2017, O’Sullivan’s fortunes took a turn. She found a place in a solid team and started driving them on herself, scheming around their midfield and dictating their tempo.

Things get lost very easily in the newsmageddon of the modern world. It has passed more or less completely under the radar here that O’Sullivan has been at the fulcrum of back-to-back titles in American women’s soccer league. This is the league in which Megan Rapinoe and Alex Morgan and Carli Lloyd and all the other American heroines who won the World Cup earlier this year ply their trade. For two straight years, O’Sullivan has been voted MVP of the league winners by her fellow players.

So when Pauw declared last week that Ireland have one of the best players in the world in their ranks, she wasn’t over-egging it for the folks back home. Anyone who saw O’Sullivan nip and tuck her way through the 90 minutes against Ukraine in Tallaght last month didn’t need to be told how good she is.

She was constantly in the right place, forever nicking the ball off the toe of the Ukrainian midfield, starting attacks, pushing Ireland on. Rianna Jarret and Katie McCabe did the scoring but it was O’Sullivan’s groundwork that set everything on its way.

Tomorrow is huge for her and for the rest of them. Afterwards, she will head to Australia for the winter, signing on as an overseas guest player for the Western Sydney Wanderers on a four-month contract.

The workaday business of chiselling a viable career out of the game can be a grind, even for someone at the top level like O’Sullivan. For the life-changing sponsorship money that some of the American, English or German players see, you need to be in the big international tournaments.

Taking care of Greece tomorrow is a vital step along a long road.