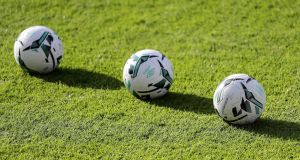 Children aged under 12 will be banned from heading footballs in training in Northern Ireland, England and Scotland. Photograph: Laszlo Geczo/Inpho

The English Football Association, alongside its Scottish and Northern Irish counterparts, has taken steps to curtail heading in youth football following research that showed former professionals were more than three times likely than non-players to die from brain disease.

On Monday, the FAI said they were, “in discussions with Uefa and with the Associations in Northern Ireland, Scotland and England regarding the effects on children from heading footballs and will monitor the effect of the new ruling in the UK.”

Mark Bullingham, the FA’s new chief executive, said: “This updated heading guidance is an evolution of our current guidelines and will help coaches and teachers to reduce and remove repetitive and unnecessary heading from youth football.”

The guidelines have been released following the landmark Field study into footballers and brain disease, conducted by the University of Glasgow last year. Based on the health records of 7,676 former players and 23,000 members of the public, it was the largest study of its kind and came to shocking conclusions.

The report was co-funded by the FA and the Professional Footballers’ Association and immediately sparked concerns over heading in contemporary youth football. This in turn has brought about the guidance, which will be implemented immediately.

The governing bodies were keen to stress that the results of the Field study did not prove that heading had caused the conditions experienced by former professionals. There is also an acknowledgement that heading is not a significant feature of competitive youth football, meaning the ban will not be applied to matches.

Ian Maxwell, the chief executive of the Scottish FA, said: “While it is important to re-emphasise there is no research to suggest that heading in younger age groups was a contributory factor in the findings of the Field study into professional footballers, nevertheless Scottish football has a duty of care to young people, their parents and those responsible for their wellbeing throughout youth football.

“It is important to reassure that heading is rare in youth matches but we are clear that the guidelines should mitigate any potential risks.”

While brain injury charities welcomed the new guidance, there were calls for more action to be taken and quickly. “It seems entirely sensible to limit the number of times children are allowed to head footballs,” said Peter McCabe, the chief executive of Headway, the brain injury association. “The question is, is this enough? Should it be limited to children?

“We cannot allow for key questions to remain unanswered, such as at what age is it safe to head a football – if at all? Neither can we afford to wait 30 years for the results of a longitudinal study to reveal the answers or hesitate to introduce other commonsense measures that protect players – such as concussion substitutes.”