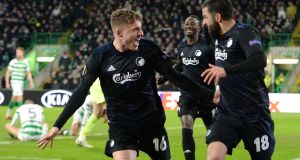 This proved a harrowing and unforeseen occasion for Celtic. Copenhagen weren’t wonderful - wonderful - but in truth they didn’t have to be. Neil Lennon watched his Scottish champions unpicked by a performance notable for its organisation. After Celtic had clawed their way back into proceedings with a penalty, as awarded by VAR, Copenhagen’s Pep Biel and Dame N’Doye sent their side into the Europa League’s next round. Comprehensively so, as it transpired.

Celtic’s domination of the early stages in Copenhagen had fuelled theories of a formality. Instead, the Danes responded forcefully; Fraser Forster’s penalty save prevented Copenhagen from bringing a lead to Glasgow. The opening exchanges of this second leg saw Stale Solbakken’s team perform in a manner which made Celtic appear ragged.

In proving nothing happens in isolation in this city, Rangers’ defeat of Braga on Wednesday resonated here. Celtic are en route to a ninth title in succession but any exit from Europe as their oldest foes progressed would sting. Moreover, there was the possibility of the Old Firm meeting in the Europa League’s last 16.

After alleviating their initial troubles, Celtic seized initiative. James Forrest should have connected with a delightful Mohamed Elyounoussi cross to send the hosts in front after 17 minutes, with the winger instead and strangely failing to commit towards the ball. Elyounoussi was similarly wasteful four minutes later, with the Southampton loanee blazing high over the crossbar after a cross was half-cleared into his path.

Lennon had deployed a defensive formation once commonly used by Brendan Rodgers on this manor. Celtic operated with a back four unless in attacking position, when that number reduced by one. Greg Taylor, the left back, provided auxiliary attacking assistance to Elyounoussi. Taylor’s cross on the half hour just eluded Odsonne Edouard, with the ball instead breaking off a Copenhagen post via the unwitting Tom Rogic.

Yet if Celtic ended the first half in territorial command, Copenhagen carried subtle menace. Mikkel Kaufmann’s pace caused occasional panic in the home defence, whilst Jens Stage should have done better with a free header from a corner which he tamely sent over the bar. Kaufmann’s withdrawal through injury as the first half drew to a close appeared a boost to Celtic. They almost demonstrated that immediately as Karl-Johan Johnsson made a hash of a deflected Edouard shot; Elyounoussi found no takers when seeking to keep the attack alive. In the final act of the period, Edouard headed straight at the Copenhagen goalkeeper from six yards.

Callum McGregor had the ball in the Copenhagen net within five minutes of the restart. However, the referee’s whistle had already blown for a foul on Johnsson. Soon, the moment appeared crucial.

Michael Santos, who had replaced Kaufmann, easily beat the hapless Jozo Simunovic to the ball when easily the underdog to do so. Christopher Jullien claimed in vain for a push by Dame N’Doye when seeking to block Santos’s cross. The French centre back did that; but only back as far as Santos, who delivered a clever finish over Fraser Forster.

Santos’s goal visibly rocked Celtic, who toiled to gain any foothold in the game in its immediate aftermath. Explanation for that can also be linked to the level of discipline - and new found confidence - as demonstrated by Copenhagen. If Celtic were to turn this tie back in their favour, it would be the culmination of a considerable struggle. Rogic tried to restore parity from 18 yards, with his low drive comfortably held by Johnsson.

Lennon called for Leigh Griffiths and a two-pronged attack for the closing 20 minutes. The move almost paid instant dividends, the Scotland striker’s reaction shot batted away by Johnsson.

VAR’s first appearance of the evening afforded Celtic the opportunity they were otherwise toiling to create. Ragnar Sigurdsson was the guilty party, with a handball which lef to an Edouard penalty. The former Paris St Germain striker dinked the ball home with typical aplomb.

If that was supposed to swing the tie, the opposite transpired. A terrific Copenhagen counter attack - launched after cheap concession of possession from Celtic - resulted in Biel finishing low, under the advancing Forster. Copenhagen’s third summed up the defensive calamity which Celtic cannot afford when playing outside of Scotland. N’Doye was on hand to prod into the net. – Guardian