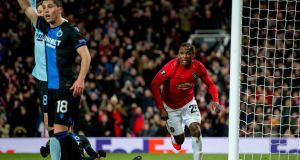 Another scintillating Bruno Fernandes display swept Manchester United into the last 16 and on this showing they are serious contenders for a second Europa League crown in three years.

Fernandes’ vision gives United a new dimension and elevates his team-mates. The playmaker scored a second penalty in two games and although naysayers may claim this was “only” Club Brugge, United have struggled against similar opponents under Ole Gunnar Solskjær. This was a performance that crushed the Belgian side and took United to seven matches unbeaten, a run that includes six clean sheets.

Odion Ighalo made his first start owing to Anthony Martial’s muscle injury, while Scott McTominay ended a two-month absence as Solskjær made seven changes from the first leg.

Brugge were without Emmanuel Bonaventure, who scored last week, and Ruud Vormer because of injury. Eder Balanta was suspended and Philippe Clement said his side required more than a miracle to progress.

This was an understatement, because the first 45 minutes made Martial’s and Marcus Rashford’s absences a nonevent, despite the pair having scored 34 of United’s 65 goals before the kick-off.

The start was fast and furious. Juan Mata fired from 20-yards and forced Simon Mignolet to parry. Mata was quick onto the rebound and pinged in a cross that a huddle of red shirts could not put away. Mignolet hoofed a long clearance into David Okereke’s path and Bonaventure’s replacement left Harry Maguire on the turf but United scrambled a clearance.

Fernandes hit a 25-yard shot that beat Mignolet but not his right post – the ball ricocheting to safety – before Maguire went on a mazy run that had him falling near Brugge’s area.

United were troubled when Maxim De Cuyper crossed from the left and Romero inadvertently punched the ball to Mats Rits who ballooned over.

The pace was relentless as was the outstanding Fernandes. If he was left frustrated after a break that allowed him to unload only for Mignolet to keep the match goalless the status could not last. It did not and the opening goal came in farcical circumstances. Daniel James’s shot was curling into the corner before Simon Deli flung himself left in what would have been a save-of-the season contender if he was a goalkeeper.

Serdar Gozubuyuk awarded the penalty for handball and showed the defender a red card but the comedy continued when the referee reviewed the incident on the pitch-side monitor. He confirmed the original decision and Fernandes, whose wait stretched past four minutes, scored his trademark penalty.

United’s control had tightened and they needed to turn their dominance into more goals. McTominay teed up James but he could not finish so Ighalo showed how. This was courtesy of some fine Fernandes’s trickery. He twisted to the left of Brugge’s area and floated in a ball that reached Mata at the far post. His return pass was slide-rule precise for Ighalo, who bundled home a classic sniffer’s finish for a debut goal.

He went close to a second when holding off Federico Ricca but Mignolet saved the effort. The goalkeeper could do nothing about the third. Fernandeswas again the creator, teeing McTominay just outside the area and the midfielder passed the ball precisely into the bottom corner.

James made way for Tahith Chong for the second half in what was a golden chance for the 20-year-old winger to impress against 10-man opposition. His first contribution was to fall on his backside under pressure from Odilon Kossounou. When Mata fell under the same player’s attention it was a foul on the edge of the area. The free-kick was slightly to the left but Fernandes spooned it wide.

United were in cruise control playing pinball football at will and serving notice that no one will want to draw them in the last 16.

Chong came off worse in a collision with Mignolet but was able to continue and when Fernandes’ match ended after 65 minutes – Jesse Lingard taking his place – he went off to deserved applause. Chong grew into the match as illustrated by a run and cross that fell invitingly to Luke Shaw.

Mason Greenwood came on for the closing stages. The 18-year-old is United’s top-scorer in the competition but it was left to Fred to complete the rout, scoring twice in the last eight minutes. – Guardian