Ken Early: Sad truth is Messi has become a problem for Barcelona 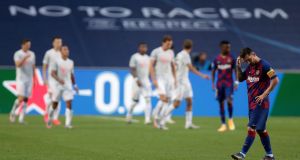 The seventh goal was the saddest. Lionel Messi comes back to his own half to get the ball, turns and scans the options. Philippe Coutinho at one o’clock. Lucas Hernandez further back at two, David Alaba stepping forward at twelve. Corentin Tolisso closer, at eleven o’clock. Thiago at eight. Where are all his teammates?

The closest is Frenkie de Jong, across the pitch at nine o’clock. But as Messi tries to pass to de Jong, somebody’s big foot suddenly appears to knock the ball away towards Thiago. He had missed Robert Lewandowski sneaking up from six o’clock. Bayern charge forward, Messi decides there’s no point in chasing back. Thiago passes to Thomas Müller, who finds Coutinho, who scores easily.

1 Young homeless mother may have been dead in tent for a number of days
2 Aldi, Lidl bow to pressure to ban non-essential ‘middle aisle’ sales
3 Europe enforces restrictions to avoid ‘millions’ of deaths
4 Bodies of mother and two children removed from south Dublin house
5 The real Contagion virus is out there and it’s causing virologists to worry
6 Cork shootings: Gardaí believe older son was shot multiple times
7 Medical gaslighting: The women not listened to or viewed as overdramatising or catastrophising
8 Michael Harding: Three reasons you’ll never see a cat in Donegal
9 Mother and two children found dead in Dublin home
10 Cork shootings: Gardaí find lengthy apparent suicide note on one of the dead men
11 School closures on the agenda following ASTI vote
12 Mazda’s first EV requires mental recalibration
13 Mother of two sentenced to life in jail for murder of former husband
14 In rural America, support for Donald Trump is complicated by the pandemic
15 Newton Emerson: Money talks and waffle walks in Shared Island initiative
16 No grand conspiracy to protect those responsible for mother and baby homes
17 Man jailed for five years for killing 7ft 5in Belarusian man
18 Department insists schools are safe as secondary teachers back strike action
19 Six Nations - France v Ireland: Kick-off time, TV details, permutations, team news and more
20 How long can Government afford to keep State pension age at 66?
21 ‘We must avoid a tragedy’: European Council head on Covid-19 mistakes
22 Dublin City Council seek use of Docklands tower block for social housing
23 Former solicitors ran an ‘identity factory’ in committing fraud – court told
24 Mother and Baby Home survivors can seek access to personal records
25 Róisín Ingle: Five ways to find joy in a pandemic. Only one of them is illegal
26 Finn McRedmond: Why did the Tories get it so wrong over feeding children?
27 ‘I actually didn’t know Ireland existed. But I read about it and knew it was perfect for me’
28 Grafton Street landlord cuts high street property values by 26%
29 The Irish Times view on Brexit talks: endgame in sight?
30 ‘I don’t want to be in Mountjoy Prison, nobody does’
31 Revenue accused of harassing businesses over Covid wage subsidy scheme
32 Pre-flight Covid tests possible ‘within days’ if given go-ahead – airports
33 How one wine retailer and restauranteur pivoted during the pandemic
34 Johnson’s Brexit Bill set to be blocked by House of Lords
35 Keith Jarrett: ‘I was paralysed. I don’t feel right now like I’m a pianist’
36 Johnny Ronan loses out on €315m Dublin docklands deal
37 Apple iPhone 12 Pro: Well worth the wait
38 Germany to impose month-long partial lockdown from Monday
39 Second-level teachers vote for industrial action over school safety and pay
40 Life under Level 5: Where can I go, who can I see, what is closed and what is open?
Real news has value SUBSCRIBE