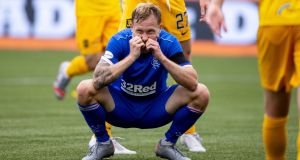 Shot-shy Rangers missed the chance to move clear at the top of the Scottish Premiership as they laboured to a 0-0 draw at Livingston.

Steven Gerrard’s team were looking to record a seventh straight win against Livingston and open up a two-point lead over Hibernian.

But they lacked the imagination or quality needed to cut through Gary Holt’s stubborn Lions and were left frustrated at full-time as they edged above Hibs only on goal difference.

With Celtic inactive for the second game running following Boli Bolingoli’s coronavirus breach, Rangers have opened up a six-point advantage over the Hoops.

But Gerrard will view this as a slip-up after seeing their bitter rivals blink first at Kilmarnock last week.

Lyndon Dykes was left out of Livingston’s line-up as he reportedly closes in on a £2 million (€2.2 million) move to QPR.

Robby McCrorie was also unavailable against his parent club so Max Stryjek made his first start in goal, with former Rangers midfielder Jason Holt also making his Lions debut.

The injured Joe Aribo was absent for the visitors as Scott Arfield was handed his first start of the campaign.

Filip Helander would have been delighted to see Dykes heading south following his torrid tussle here in a Betfred Cup clash last term.

The same could be said for the rest of the Rangers line-up as they came up against what looked like a back seven at times.

Rangers did have a penalty appeal after 13 minutes, when a Ryan Kent shot stuck Jon Guthrie’s foot before ricocheting against the defender’s hand, but referee Nick Walsh correctly ruled it was accidental contact.

Gerrard’s team tried time and again to beat Livingston’s midfield squeeze with balls over the top, but that was meat and drink for the hosts’ towering back line.

Alfredo Morelos drove into the side-netting while a looping Arfield header soared wide.

Perhaps had Marvin Bartley been a few years younger he may have done better as he lumbered away from Helander just before the break, but the 34-year-old had nothing left in the tank by the time he reached the box and he saw his cutback turned away by Arfield.

It took 54 minutes for Rangers to finally test Stryjek as Kent cut past Bartley and let fly but the keeper punched clear before Morelos drilled wide.

Gerrard decided it was time for changes and introduced Kemar Roofe and Brandon Barker.

But there was further frustration for the Rangers boss in the 68th minute when Borna Barisic’s corner broke in the six yard box only for both Connor Goldson and Morelos to lash at fresh air.

Morelos’s last involvement was to waste another back-post header before he was replaced by Cedric Itten with 20 minutes left.

Craig Sibbald almost snatched a shock winner from inside his own half with eight minutes remaining – but goalkeeper Jon McLaughlin scrambled back just in time to keep out the Livi midfielder’s audacious effort.

Stryjek’s part moments later was just as crucial as he palmed away a Barisic free-kick, sparking jubilant cheers from the Livingston bench.