Josh O’Hanlon sends Cork City back top of the table 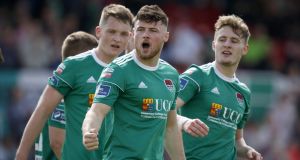 Josh O’Hanlon came off the bench to score the winner for Cork City on Saturday. Photograph: Inpho

Cork City returned to the top of the Premier Division table as substitute Josh O’Hanlon netted the winner with his first touch at Turner’s Cross on Saturday.

Having fallen behind to Danny Morrissey’s goal in the 34th minute, City drew level almost immediately through Graham Cummins but early second-half efforts to push ahead proved fruitless as Limerick frustrated them.

They finally made the breakthrough on 70 though as another sub, Kieran Sadlier, did well on the left before sending over a fine cross which O’Hanlon met at the back post for his first league goal for the Rebel Army.

Just prior to that, Limerick had had a great opportunity to move in front again as Mark O’Sullivan latched on to a fine Shane Duggan pass but his low shot rolled just past the post.

After going behind, the visitors pressed but couldn’t fashion a chance of an equaliser and, while City had chances to make it 3-1 through Sadlier and O’Hanlon, they didn’t need them.

The game might have turned out differently had City been able to take advantage of a ninth-minute penalty, awarded after a surging Steven Beattie run was halted by a Killian Cantwell pull-back.

Limerick had the lead when Morrissey did well to fire them ahead after Billy Dennehy’s free kick broke in the penalty area, but City were level again when Cummins met Colm Horgan’s cross and the win was secured when O’Hanlon did the needful.