Ken Early: Britain marches to the sound of a different drum

‘If this Cheltenham stuff was a scene in a disaster movie, it wouldn’t make sense’ 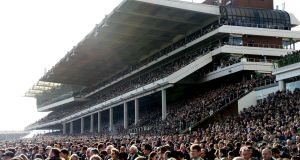 Crowds in the stands during Day Four of the Cheltenham Festival. Photograph: The Jockey Club/Cheltenham Racecourse.

Of course, like others, I was only paying attention now because it seemed so astonishing that such an enormous crowd was being encouraged to huddle and sway together in the context of a viral outbreak that has shut down societies across Asia and Europe.

I thought, if this Cheltenham stuff was a scene in a disaster movie, it wouldn’t make sense. So, there’s a deadly virus on the loose and they’re . . . they’re doing what? For it to work in a movie, the crowd would have to be ignorant of the virus – the villain would have to be secretly introducing it in their midst while they revelled on in blithe, tragic ignorance.

Of course movies have to make some kind of sense on their own terms, whereas real life just happens. Pretty much every member of that crowd knew about the virus, but they had gone to Cheltenham anyway because they wanted to, and nobody had told them not to.

Certainly, many tried to advise them not to and the advice had made no difference. Would anyone be surprised if the Cheltenham crowd turned out to contain an above-average proportion of the type of people who become furious when their car pings to remind them to fasten their seat belt?

Likewise, the Champions League match between Liverpool and Atletico Madrid went ahead

Of course, the British government could have stopped it, as happened in 2001 when the festival was first postponed and then cancelled due to the outbreak of foot-and-mouth disease. But in 2020, with a case of coronavirus confirmed in the Cheltenham area on the eve of the festival, they simply waved it through. Likewise, the Champions League match between Liverpool and Atletico Madrid went ahead at a packed Anfield, while the one in Paris between PSG and Borussia Dortmund took place behind closed doors. The Atletico fans would not have been allowed to watch their team anywhere in Spain, let alone in their virus-stricken home city – but in the UK it was fine.

At the time, in my amateur opinion, allowing these events to proceed looked like gross negligence. But I should have given the British government more credit. On Wednesday, prime minister Johnson released a video with deputy chief medical officer Jenny Harries, who said: “In this country, we have expert modellers looking at what we think will happen with the virus. We’ve looked at what sorts of interventions might help manage this as we go forward, push the peak of the epidemic forward. And in general, those sorts of events or big gatherings are not seen as something which is going to have a big effect, so we don’t want to disrupt people’s lives.”

On Thursday Johnson appeared with his top medical and scientific officials and reiterated that “the scientific advice, as we’ve said over the last couple of weeks, is that banning such events will have little effect on the spread”, though he did add that his government was assessing the additional impact of these events on public services.

So the British inaction was not simply an expression of a kind of paralysis – a failure to grasp what was happening and respond in the appropriate way. Rather, while other European governments had rushed headlong into panic measures like banning mass gatherings, the British had looked to “the science” and taken a calculated decision not to. In a sense, the British government was going to put that science to the test in an experiment on its own people, and the crowds at Cheltenham and Anfield were among the guinea pigs.

Oddly enough, within 24 hours of Johnson announcing that his government did not believe the time was yet right to suspend football matches, football had gone ahead and suspended itself. It turned out that, whatever “the science” was telling Johnson, the players were not excited about the part earmarked for them in his government’s grand experiment.

As Wayne Rooney put it in a forceful column for the Sunday Times: “I was thinking, ‘I don’t want to travel, I don’t want to play, I don’t want to put my family at risk or for fans to be at risk.’ . . . it almost felt like footballers in England were being treated like guinea pigs. The rest of sport . . . was closing down and we were being told to carry on. I think a lot of footballers were wondering, ‘Is it something to do with money being involved in this?’ ”

Not that you would have guessed that players were nursing such fears last week when the PFA – the union that is supposed to represent the interests of professional players – issued new coronavirus guidelines. Among the pearls of advice dispensed: players should not share water bottles, towels or bathrobes with colleagues, and they should avoid eating in the dressing room. The PFA published this ludicrous document last Wednesday, at a time when the equivalent unions in Italy and Spain had already demanded the suspension of all football in those countries for the protection of their members.

But the PFA marches to the beat of a different drum; this is England. A country where, in an article published on March 3rd, Jeremy Warner, an associate editor at the Daily Telegraph, said the quiet part loud: “Not to put too fine a point on it, from an entirely disinterested economic perspective, the Covid-19 might even prove mildly beneficial in the long term by disproportionately culling elderly dependents.”

The truly fantastic thing about this sentence is that the writer can describe as “entirely disinterested” the view that it might be good if dependent old people were “culled”, and doesn’t notice a problem. Maybe Moloch’s mistake was to appear as a horned demon wreathed in fire and smoke – the presentation made it too obvious he wasn’t a good guy. Had he only thought to express himself in the mild tones of a broadsheet business columnist he might even have been able to sell his demands for human sacrifice as “entirely disinterested”.