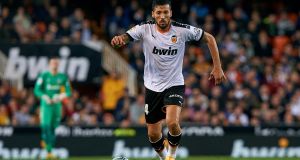 Ezequiel Garay is one of five Valencia players and staff to to test positive for coronavirus. Photograph: David Aliaga/MB Media/Getty Images

Five members of the playing squad and staff of La Liga club Valencia have tested positive for the coronavirus, the Spanish side said on Sunday.

“Valencia CF inform that five positive cases of the Covid-19 coronavirus have been detected amongst first team staff and players,” the club said in a statement.

“All of these persons are now at home, in good health and obeying self-isolation measures.”

Earlier on Sunday Valencia and Argentina defender Ezequiel Garay became the first La Liga player to confirm he has the virus.

“It’s clear that I have got off to the wrong start in 2020. I’ve tested positive for the coronavirus, I feel very good and now I just have to listen to the health authorities and for now remain isolated,” he wrote on Instagram.

The 33-year-old was already ruled out for the remainder of the season after suffering a knee injury in February.

Valencia travelled to Milan last month for a Champions League match at Atalanta played in front of a packed San Siro stadium, before restrictions were placed on sports events in Italy.

A Valencia-based radio journalist who travelled to the match tested positive for the virus the following week.

The second leg of the tie, which Valencia lost 8-4 on aggregate, was ordered to be played without spectators at the club’s Mestalla stadium.

In line with most major sports worldwide, all organised football in Spain has been postponed for at least two weeks in a bid to prevent further spread of the virus. Spain is the second worst-affected country in Europe after Italy.

Since Saturday, Spain has been in partial lockdown as part of a 15-day state of emergency to combat the epidemic.