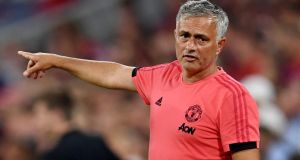 Manchester United did not follow through with some of José Mourinho’s transfer targets because of misgivings about the players he had identified and a decision, from the top of the club, that he should not be allowed to get his way if it meant potentially wasting tens of millions of pounds on a short-term fix.

As the transfer window closed on Thursday with no more arrivals at Old Trafford, new details have emerged that highlight the differences between an increasingly disaffected manager and the people above him, primarily the executive vice-chairman, Ed Woodward, in terms of the players on Mourinho’s wishlist and whether they would have been worth the money.

To Mourinho’s intense irritation, United’s conclusion was that in most cases he had targeted defenders who were no better than those they already had and who, in today’s inflated market, could conceivably have cost upwards of £70m without vastly improving the team.

Mourinho’s enthusiasm for Harry Maguire was not shared by the Old Trafford decision-makers and when the club approached Leicester they were put off by the kind of fee that would have been necessary to sign the England international in the wake of Virgil van Dijk’s £75m transfer from Southampton to Liverpool last season.

The interest in Maguire was abandoned and, for all the speculation linking Toby Alderweireld with Old Trafford, the truth is there has been only one conversation between Woodward and the Tottenham chairman, Daniel Levy, throughout the summer. That was Levy calling Woodward to ask about two of United’s players, one being Anthony Martial. Woodward wants to keep Martial and that, again, is a serious issue between club and manager. Mourinho was willing to cut Martial free and, behind the scenes, he has been withering in his assessment of the player.

The suspicion of United’s hierarchy is the manager is taking a short term view rather than thinking more strategically about what would be better for the club in the coming years. Alderweireld will turn 30 in March and, as well as a huge transfer fee, would have warranted a salary in the region of £25m over the next four years. United decided the player was not worth such a huge outlay, particularly given his age.

Mourinho sees things differently and can argue that, without new signings, it is unrealistic to expect his team to overhaul Manchester City. He made that point in a press conference yesterday by stating United’s second-placed finish last season, 19 points behind City, was “one of my biggest achievements in the game”.

Yet the club have had to balance the manager’s wishes, and the permanent battle to keep him happy, by taking into account Mourinho is notorious for wanting short-term measures, rarely stays too long at any club and does not tend to worry about what happens when he leaves. Their own vision of team-building is considerably different and that is why Woodward is against selling players such as Martial, Paul Pogba and Luke Shaw when they could conceivably be an asset to the club for many years.

United did have significant money available for summer signings and would have paid in excess of £100m for Raphaël Varane if the French World Cup winner had been available from Real Madrid. Woodward had breakfast with Real’s president, Florentino Pérez, over the summer but nothing came of it.

Woodward was also willing to make an exception for Diego Godín of Atlético Madrid and inquired about the Uruguayan’s £18m release clause this week. The money was considered reasonable for a player of Godín’s ability but the 32-year-old was reluctant to leave Spain and another deal was scratched off the list.

Otherwise, United were reluctant to spend vast amounts of money on players they did not consider to be elite performers. Jérôme Boateng of Bayern Munich would once have appealed and Mourinho was keen on the Germany international. However, Boateng’s injury record counted against him, especially as United were mindful they had already bought two players from Bayern, Owen Hargreaves and Bastian Schweinsteiger, whose time at Old Trafford was notable for how many games they missed.

Mourinho’s desire to bring in another centre-half indicates he has misgivings about Chris Smalling, Phil Jones, Victor Lindelöf and Eric Bailly, despite the latter two being his own signings.

Yerry Mina was another possibility but United were put off by what they considered to be excessive agent fees. The sum in question is not clear but must be significant: United will say in private they hope Everton, who have signed the player from Barcelona, have not paid the same, on the basis it could seriously distort the fees demanded by agents in future.

The irony is that United helped to create that market by routinely flexing their financial muscle and, in the case of Pogba’s £93m transfer from Juventus, the mind-boggling sums that went to the player’s adviser, Mino Raiola. Alexis Sánchez’s contract – £391,000 a week with an extra £75,000 for every game he plays and an annual £1.1m signing-on fee – is another indication of how far the club are willing to go when a category-A player is available.

Yet United blame other clubs for the transfer market spiralling and trace it back to Kyle Walker’s £53m move from Spurs to Manchester City last summer. Neymar’s £200m switch to Paris Saint-Germain took the market to another level entirely, but the view at Old Trafford is that the most outlandish deal was Barcelona signing Ousmane Dembélé from Borussia Dortmund for a fee that could rise to over £135m. United believe Van Dijk’s fee will not seem disproportionate within a year but, with the prices currently so inflated, the club do not want to pay similar amounts unless their targets are at a certain level -higher, plainly, than Maguire or Alderweireld.

Perhaps surprisingly, United are not among the clubs – Spurs being one – who are regretting the early closure of the transfer window and the feeling at Old Trafford is that the rest of Europe will eventually fall in line.

The bigger problem for United is how the summer’s transfer business affects the club’s relationship with Mourinho when the only signings are Fred from Shakhtar Donetsk, the injured Diogo Dalot from Porto and Lee Grant, as a third-choice goalkeeper from Stoke.

Mourinho has so many players ruled out of the game against Leicester tonight, or not deemed fully fit after their post-World Cup breaks, he floated the idea the substitutes may include “16-year-old boys without experience”. On this occasion, however, he chose not to question the club’s transfer activity. It was time, he said, to “stop thinking about the market”, insisting he was going to enjoy the season and it was “a lie” to say he did not get on with his players.

Unlike his first two seasons in Manchester, Mourinho stopped noticeably short of talking up United as potential champions but his spikiest moment, presumably with Liverpool in mind, was directed towards the media for “making people that finish second look like they were relegated and people who win nothing, finishing below us, look like serial winners”. – Guardian