Courtois intent upon a move to Real Madrid 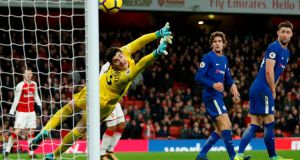 Thibaut Courtois: his agent says Chelsea’s Belgian international goalkeeper wants a move to Madrid to be near his family. Photograph: Adrian Dennis/AFP

Thibaut Courtois has made clear his desire to leave Chelsea before the closure of the transfer window this month by spurning talks with Maurizio Sarri and failing to report back for pre-season training at the Premier League club.

The Belgium international, like his compatriot Eden Hazard, had been due on Monday afternoon at Chelsea’s Cobham training base where the new head coach hoped to hold discussions over his future. Instead, the 26-year-old is understood to have remained in Belgium while he awaits news of a prospective return to Spain with Real Madrid.

Courtois has entered the final 12 months of his contract, with no progress having been made last season to convince the player, who spent three years on loan at Atlético Madrid earlier in his career, to extend his stay at Stamford Bridge.

Chelsea had anticipated him joining the England defender Gary Cahill in the stands to watch the Community Shield at Wembley on Sunday but the goalkeeper did not appear, offering no explanation, as his team-mates lost 2-0.

The situation feels similar to Diego Costa’s messy divorce from the club a year ago, when the Spain forward had attempted to force through a move back to Atlético by remaining in Brazil. Costa was eventually permitted to re-sign for the Spanish club, albeit after the transfer window had closed.

Real have bid around €40m for Courtois whose agent, Christophe Henrotay, went public last week calling for Chelsea to allow his client to move.

“I have been reading everywhere that Chelsea are saying it is up to Thibaut,” Henrotay had told the Sun.

“But he has made it clear to the club the best option for him is to move to Madrid. For him this is a big decision because he wants to be near his family, and there is an offer in place for Chelsea to accept.”

The goalkeeper had employed similar tactics to force through his move from Genk to Chelsea, just before a preseason friendly against Lyon, in 2011. Regardless, with time a healer, the Belgian had actually been honoured by Genk before kick-off at their game against Sint-Truiden on Sunday, presenting the match ball at the Luminus Arena and accepting a large picture of him in action during his time at the club. Chelsea face Lyon in a similar fixture on Tuesday at Stamford Bridge.

While the transfer deadline is set at 5pm on Thursday for English clubs, Chelsea can sell Courtois at any point up to the end of the month when the market closes for their counterparts in Spain. Despite Sarri suggesting on Sunday that it might be preferable to sell the goalkeeper if he informs him of his desire to leave, the sense of urgency to secure a replacement has been heightened by Courtois’s no-show.

Stoke’s Jack Butland could be secured for around €30m and is eager to retain his England place by featuring regularly in the top flight.

Sevilla’s Sergio Rico, who has been expected to leave this summer, could be an alternative. There have been suggestions in Spain that Chelsea might be prepared to trigger a €100m (£89m) buy-out clause in Jan Oblak’s contract at Atlético, but such a move might be surprising given Chelsea had been reluctant to meet AS Roma’s valuation of Alisson this summer, with the Brazilian subsequently moving to Liverpool for a world-record €75 million.

While the board scramble to secure a replacement, Chelsea are unlikely to confront similarly disruptive problems with Hazard, despite the Belgium captain having indicated at the end of a successful World Cup campaign that the time may be right for a new challenge.

The club are keen to secure the 27-year-old to new terms worth around €336,,000 a week. But while Hazard, who has two years to run on his contract, is unlikely to rush to sign, nor will he agitate for a move this summer.

Real have not bid for the playmaker’s services, despite Hazard having made clear his desire to move to the Bernabéu at some stage in his career. He was joined by N’Golo Kanté, who has been offered a new deal worth €324,000 a week, Michy Batshuayi, Cahill and Olivier Giroud at Cobham for a 4pm session at Cobham on Monday as they reported back after the summer tournament.

Meanwhile, Nabil Fekir has reignited speculation over his future by suggesting he could still move away from Lyon in this transfer window. Fekir was on the verge of a €60m transfer to Liverpool in June only to see his switch to Anfield placed on hold because of concerns over the France international’s fitness.

Liverpool had hoped to announce the 25-year-old before the World Cup began and the deal was so advanced he had agreed personal terms on a five-year contract and also conducted an introductory interview with LFCTV, the club’s in-house television channel.

The attacking midfielder, who was a key transfer target for Jurgen Klopp this summer, ruptured a cruciate ligament in September 2015 that caused him to miss the majority of the 2015-16 campaign. He also missed several weeks of last season with a knee problem.

Fekir, who has also now been linked with Chelsea, returned to training with Lyon on Monday after helping his country win the World Cup and, despite being happy at the Ligue 1 club, admitted he was unsure about his future.

“As you can see, I am in Lyon. I am very good here,” he said. “But the transfer window is still long and everything goes very fast in football.”