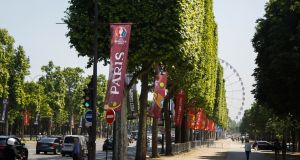 Only one League of Ireland player featured at Euro 2016 in Paris last summer. Photograph: Inpho

Ireland has fared exceptionally poorly in the distribution of €150 million of Euro 2016 revenues earmarked for clubs across the continent with the leagues, north and south, receiving just €78,000 between them.

In all, clubs affiliated to all 54 of the tournament’s participating associations shared in the compensation payments which related to the use of their players by national team for qualifiers or the actual finals in France.

English clubs shared out more than a fifth of the total pot – some €38.3 million between them – but the League of Ireland’s total was the lowest of any national league with just one club, Sligo Rovers, receiving €16,706.15 in respect of the four appearances made by Sander Puri for Estonia towards the end of the qualifying stages.

The Irish league fared only slightly better despite the national team there having also qualified for the finals with Linfield pocketing all €62,670.23 of its allocation. The FAI and IFA were the only two national associations amongst the 54 that did not have at least three clubs on the list of beneficiaries.

Overall, 641 clubs received payments ranging from a minimum of just over €3,500 for a player who participated in just one game in a 12 match qualification group, to the €3.48 million received by Italian champions Juventus in respect of the various team members they would have had in the Italian and other squads at both the qualifying and tournament phases of the competition.

Liverpool came in second, on €3.39 million, with Southampton (on €2.09 million) being the closest there was to a surprise in the top 10 of the list.

Even in the countries to have taken most, not all of the clubs to benefit were top flight sides or especially big names. In England, for instance, where some 60 clubs are in line to receive cheques, Fleetwood Town received around €177,000 while Stevenage, Rotherham and Crawley Town are all in line for payments. In fact, just over 10 per cent of the 641 clubs named play in the third tier of their national leagues.

At the other end of the international spectrum, clubs in countries that failed to qualify but whose national teams rely heavily on locally based players benefited substantially with Gibraltar’s Lincoln Red Imps doing best of all in this category with a payment due of some €442,000.

In total, clubs in Gibraltar will receive just over €800,000 between them while the corresponding figures for Liechtenstein, Malta and Luxembourg are €710,000, €826,000 and €568,000 respectively. The amount for Iceland is lower, as most of the national squad is based overseas, with five of the country’s own league’s clubs sharing €118,712.95.

Aside from in Ireland, the scale of the shadow cast by the Premier League is shown by the figures for Scotland and Wales with Celtic taking €449,000 of the €1.75 million distributed there and only Bala Town (€21,000) getting a look in Wales after Swansea and Cardiff City had received their €1.7 million combined.

The payments are the result of a long campaign by the European Clubs Association (ECA) to have its members for making players available to national associations for games and the total amount for Euro2016 was up by 50 per cent on the corresponding figure for 2012.

The organisation primarily represents the interests of the richest clubs in the biggest leagues and while a great many other outfits affiliated to less well off associations have done rather well here, the scheme has probably cost Irish football in that that the total prize fund for the tournament would almost certainly have been higher had the scheme not existed.

That said, the Irish leagues have, not for the first time, done exceptionally poorly with both managers relying, almost exclusively, on players based in England to reach and then play at the finals. With clubs here failing to recruit from overseas themselves in the way that many clubs across the rest of the continent have.

Full details of the payments are available on the ECA website.

McIlroy well off pace as Thomas leads low-scoring Zozo 10:24
Seán O’Brien: Anger over my parents’ break-up has never left me 09:30
Touching response to Rashford’s clarion call reveals very best of England 07:00
Michael Walker: Is De Gea an answer again amid the questions at United? 06:00
Greville and Westmeath relishing life in the top tier 06:00

1 Seán O’Brien: Anger over my parents’ break-up has never left me
2 Six Nations - Ireland v Italy: Kick-off time, TV details, team news, standings and more
3 Ireland out to make a bold statement of intent against callow Italian side
4 Irish duo set for AFL Grand Final as sport lifts the gloom Down Under
5 Ireland entitled to feel quite at home with their sparing use of residency rule
Real news has value SUBSCRIBE
Crossword Get access to over 6,000 interactive crosswords