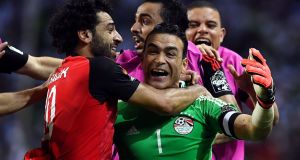 Egypt’s goalkeeper Essam El-Hadary celebrates with his teammates at the end of the penalty shootout win over Burkina Faso. Photograph: Getty Images

It is a script that would require a cast-iron suspension of disbelief, but film makers would have no shortage of material to document the exploits of 44-year-old goalkeeper Essam El Hadary, whose heroics helped Egypt reach the African Nations Cup final on Wednesday.

Not satisfied with getting another chance in the national team and breaking the record for the oldest player at a major continental championship, El Hadary saved two spot-kicks as the seven-times champions beat Burkina Faso 4-3 on penalties.

El Hadary, making his 150th international appearance, virtually carried his team to the final with a string of second-half saves in Libreville, keeping the score tied at 1-1 before stopping from Herve Koffi and Bertrand Traore in the shootout.

Flinging himself around his box like a sprightly teenager, El Hadary rebuffed the Burkinabe time and again and was all that stood between his tired-looking side and defeat.

“I had a feeling that I was going to save the final two penalties,” El Hadary said after the game.

A place in Sunday’s final in Libreville, where Egypt face either Cameroon or Ghana, offers him a chance to become the first player to win five Nations Cup titles.

His first came as a reserve in 1988, just two years after his debut, but he was at the peak of his career as Egypt won three back-to-back Nations Cup titles between 2006 and 2010.

“When we headed to the penalty shootout, our 2006 title victory crossed my mind,” he added. In that final El Hadary saved from Didier Drogba as Egypt edged Ivory Coast 4-2 on post match kicks.

Images of El Hadary celebrating on top of the goalpost remain among the tournament’s most endearing.

A recall as back-up in the squad last year and then injury to Ahmed El Shenawy in the first game of the tournament in Gabon opened the door for another remarkable chapter to his career, just two days after he turned 44 on January 15th

“I’m happy to be in contention for all of these records but the most important is for Egypt to win the cup,” El Hadary told reporters on the eve of Wednesday’s semi-final.

1 Diego Maradona dies of heart attack, aged 60
2 Keith Duggan: Through the glories and the disgraces, we were all Maradona addicts
3 Andy Farrell to delve deeper into Irish squad for team to play Georgia
4 Gordon D'Arcy: I know what Joe and Cheika would do. Fix the basics
5 Darragh Ó Sé: Cork and Donegal went out with the wrong attitude
Real news has value SUBSCRIBE
Crossword Get access to over 6,000 interactive crosswords