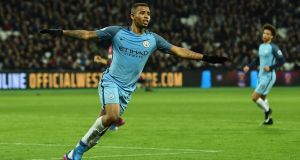 If this was a glimpse of Manchester City’s future then the Premier League, other than perhaps West Ham United, should rejoice at the thrill that is to come. A team who had run riot in the FA Cup at this expansive venue a little under a month ago merrily put these opponents to the sword once again to surge to within a point of second place. Their authority was hardly ever tested, their brilliance on the ball illuminating the Olympic Park. How they must crave visits to this corner of the capital.

Pep Guardiola had initially paced his huge technical area here but, once his team had eased ahead, sat back and relaxed instead. A few seats along shivered Sergio Agüero for all but the last 17 minutes of play, the Argentinian descending deeper into his bench coat while a new star rose to prominence out on the turf.

Gabriel Jesus, recently arrived from Palmeiras for £27 million, tormented befuddled West Ham players at will until Sam Byram determined the only way to stop the youngster was to clatter him. Already the Brazilian looks the successor in waiting to Agüero. The thought that he will actually improve in the years ahead is enough to reduce defenders to gibbering wrecks.

It had not taken much to dent local pre-match optimism, a feel-good factor generated by a pair of high-profile new signings and the exorcism of all things Dimitri Payet dissipating well before the half-hour mark. City have had that effect on West Ham of late, the hideous memories of the drubbing inflicted here under four weeks ago duly flooding back as soon as the visitors allied rhythm with incision.

It did not seem to matter that the most controversial selection decisions had been those made by Guardiola. Aside from Agüero, Claudio Bravo also found himself relegated from the club’s regular Premier League team, presumably on the basis that Willy Caballero had actually pulled off one relatively difficult save on Saturday in what was otherwise another FA Cup saunter across the capital at Selhurst Park.

Yet it mattered little. Other than advancing to panic Aaron Cresswell into skying a shot into the away support, Caballero spent long periods merely admiring from afar the class of his own team’s front five. Their slippery movement was a thing of beauty, runners tearing into West Ham from all angles to leave the home defenders utterly dizzied at the pace at which they were being dismantled.

And at the focal point of City’s attacks was Jesus. The teenager, sporting gloves, short-sleeved shirt and the ball invariably glued to his instep, was utterly irrepressible on his first Premier League start. Already his signing feels inspired. There was snarl in his tackling, energy in his eagerness even to track back, and jaw-dropping skill in his forays forward. The forward schooled at Palmeiras has the world at his feet.

He will surely thrive with such invention around him. Leroy Sané was just as impressive, dispossessing dawdling West Ham players whenever they had the temerity to take a breath in possession in enemy territory, and humiliating Byram and José Fonte whenever he could isolate them one-on-one. He had nutmegged the former and glided away from the Portuguese midway through the first half, Fonte reduced to a trudge as Sané’s centre flicked off Darren Randolph and was tapped in by David Silva at the far post.

That reward was plundered just four minutes after City had eased ahead, Cresswell’s aimless pass infield collected by Kevin De Bruyne who sprinted downfield, exchanged passes with Jesus, then opened his body up to sidefoot the opening goal beyond the static West Ham goalkeeper.

There is no living with City in this mood. Jesus deserved his own reward and, in truth, was never likely to be denied for long. He had just summoned a gloriously paced pass inside Cresswell for Raheem Sterling to collect – De Bruyne air-kicked at the resultant cross – when Pedro Obiang surrendered the ball wastefully to Sané. The rat-a-tat exchange which ensued saw Sané and Sterling slice the hosts apart, with the 19-year-old converting at the far post. He should have added another from Sané’s centre immediately after the break with their opponents increasingly forlorn, despite Slaven Bilic bellowing instruction from the sidelines.

His only consolation is that he does not have to confront this team again this term, though some of his players may bear the scars of this occasion for a while yet. Fonte, enduring his own personal nightmare, was culpable again as City toyed with their prey, the centre half taking away Sterling’s legs to concede a penalty which Yaya Touré eased beyond Randolph.

Guardiola had struggled to contain his excitement last month at the impression of time and space in possession granted by this showpiece venue. None of West Ham’s recruitment in the transfer window had served to clog up the perceived acres the visitors so relished. This was a thrashing.