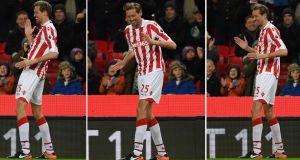 Peter Crouch scored his 100th Premier League goal but his team had to share the points with Everton because of flawed finishing, strong goalkeeping and an unfortunate own goal by Ryan Shawcross. Stoke City were left with regrets as well as encouragement from a match in which they were superior for long periods, although Tom Davies would have snatched a late winning goal for the visitors but for a brilliant save by Lee Grant.

Having had last weekend off because of their eliminations from the FA Cup and been spared transfer deadline day haggling because they had completed whatever shopping they were able to do earlier in January, both managers enjoyed an ample amount of time to prepare for this duel.

The hope for both was that their teams would resume where they had left off before their breaks, as Everton arrived on the back of two victories and a pair of encouraging performances while Stoke had also been in strong form and would have been able to boast of a similar record if it had not been for Wayne Rooney’s record-breaking equaliser against them here 11 days ago.

Saido Berahino had been paraded to Stoke fans before kick-off in that match against Manchester United after joining from West Bromwich Albion the day before and, by all accounts, the 23-year-old had spent the meantime training intensively – and smiling incessantly – as he worked to regain sharpness after a long stretch in Hawthorns purgatory. Mark Hughes had spent months chasing the player but had no wish to rush him into action prematurely so Berahino began on the bench here. Trusty old Crouch, 13 years Berahino’s senior but on a hot streak of three goals in his last five appearances coming into this game, started instead.

It took the veteran seven minutes to show the wisdom of that decision.

Charlie Adam began the move by pinging a long ball over the visiting defence and into the path of Marko Arnautovic on the left wing. The Austrian sent a low cross to Crouch, who slotted into the net from close range. Then he added to the locals’ merriment by trotting out his old robot dance routine, gratifying Stoke fans who had run a social media campaign calling for him to do exactly that upon hitting a century of Premier League goals. The landmark may not be acclaimed as loudly as the one reached here by Rooney, but at 36 Crouch is still a Premier League crowd pleaser, and that is good going by anyone’s standard.

Now Everton had to respond. They had begun tidily enough, with Morgan Schneiderlin helping to circulate the ball in midfield on his first start for the club since renewing his working relationship with Ronald Koeman. But they lacked vibrancy and struggled to pose a threat to Lee Grant in the home goal, a wonky 25-yard blast from Romelu Lukaku being meagre fruit for their early labours.

Crouch got chances to increase Stoke’s tally. Joel Robles saved a header from the striker in the 23rd minute after a cross by Adam. Three minutes later a flick by Arnautovic presented Crouch with another opportunity but he lashed a low volley inches wide from the edge of the box.

Adam, too, was playing as if still in his prime. On the half hour the 31-year-old dribbled past three flimsy challenges and dinked the ball to Arnautovic, who was on his own at the other side of the box. Robles, more alert than any defender, charged out to block the ensuing shot.

Everton opened up the home defence for the first time in the 39th minute and were rewarded with a lucky break. Kevin Mirallas picked out Séamus Coleman, who, having crept undetected into the right-hand corner of the box, tried to curl a shot into the net.

That is where it ended up but only because Shawcross inadvertently helped it on its way, a fact that was only made clear to referee Craig Pawson after consultation with his assistant. Pawson had initially ruled the goal out, presumably because he thought the offside Lukaku had got the decisive touch.

Aghast at how frequently Stoke penetrated his three-man defence, especially down the flanks, Koeman switched to a 4-4-2 formation for the second half. That made Everton more solid and, what is more, they were the first to threaten thereafter, albeit via a long-range shot by Ross Barkley that Grant saved comfortably. Adam then shot from even farther out but Robles foiled his attempt to reprise the famous goal he scored from the half-way line against Chelsea two years ago.

Seeking an edge Hughes turned to Berahino in the 67th minute. But an Everton substitute, Ademola Lookman, soon gave the home fans a scare with a shot that Grant parried at the near post.

Berahino nearly made the perfect debut when he lobbed Robles but Ramiro Funes Mori headed off the line. Davies then tried to land a late sucker punch but Grant tipped away his header with one hand.