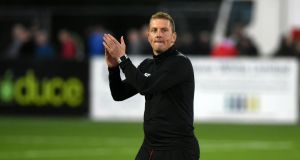 Vinny Perth: “We’re in a good place going into this stage of the season but Europe is a step up.” Photograph: Ciaran Culligan/Inpho

As he awaits Tuesday’s qualifying round draw in Nyon, Dundalk boss Vinny Perth insists that the greatest pressure on him and his players in Europe this year will come from within a group that is ambitious to do well after having shown it can compete with strong overseas opposition. His American employers, however, might just see things in terms of the size of the cheque that they will eventually be due to them when the games have been won or lost.

Two rounds of the Champions League and one of the Europa League, in which Cork City, Shamrock Rovers and St Patrick’s Athletic are all due to compete, will initially be drawn. Dundalk and Cork are seeded in the first rounds of the respective competitions.

The Airtricity League champions will earn at least €800,000 under structures that guarantee them at least one round in each competition. Progressing to the qualifying round of the Champions League would be worth a further €400,000 while defeat would mean a second round Europa league tie where the prize on offer would be €260,000.

Even those figures dwarf the prize money picked up directly for actually winning the league last year but Europe becomes more lucrative with each round closer a club gets to the group stages. Reaching that point in the Champions League, an almost unimaginable achievement for an Irish club the way things are arranged right now, would be worth upwards of €16 million in guaranteed prize money alone.

Perth’s priorities, though, are a little more immediate than that just now. “We’re in a good place going into this stage of the season but Europe is a step up and even the first qualifying round can be very touch so you need a bit of luck not to end up being drawn against one of the top ranked sides,” he says.

Cork City know all about that from last season when they landed Legia Warsaw in the Champions League then Rosenborg in the Europa. Dundalk have the advantage of being seeded due to their previous achievements but that is no guarantee of an easy ride in the first round after which they would unseeded anyway due to the arrival onto the scene of bigger, and notionally better, outfits.

“Obviously you look at the best and worst case scenarios and there are a few we would like to avoid,” says Perth. “The Polish champions, Piast Gliwice, are unseeded because of their lack of European results but they would be tough.”

Dundalk have already avoided a couple of the other sides their manager was hoping to steer clear of courtesy of the computerised grouping that took place on Monday afternoon but Linfield are still prospective opponents. Given their ranking and the fact they will be out of season, they would be good ones on paper but Perth is wary, believing they would be well prepared and particularly motivated if they were going to be up against his side.

Clearly getting the winners of the preliminary round to be played out in a couple of weeks time between Feronikeli of Kosovo, Gibraltar’s Lincoln Red Imps, Tre Penne of San Marino and Andorra’s Santa Coloma would, on the face of it, be the more the promising outcome in terms of the first round.

Robbie Benson is due to be back from injury by the time the games come around for Dundalk whose right back, Sean Gannon, was named on Monday as the Airtricity/Soccer Writers’ Association Player of the Month for May ahead of Danny Mandroiu and Trevor Clarke.