Ken Early: What if Maradona had been more like Messi?

The style in which Diego Maradona did things inspired passionate devotion 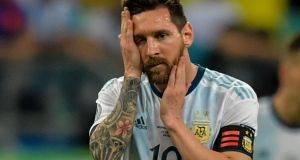 On Saturday night Argentina began their Copa America campaign by losing 2-0 to Colombia. They have picked up where they left off at the World Cup – a psychodrama of 10 regular guys dying of shame because they know that once again they’re about to let down Lionel Messi.

It’s typical of Messi’s luck with Argentina that in the same week he sets out on his latest accursed effort to win an international trophy, the new Asif Kapadia film Diego Maradona goes on general release, documenting some of the greatest one-man trophy wins in the history of the sport.

Watching the film it occurs to you that it has become ridiculous to compare Maradona and Messi. Maradona had one season in his career when he scored more than 40 goals; Messi has done this for the last 10 years in a row.

Messi has just signed off on another 51-goal club season at an age when Maradona was completing a 15-month ban for a positive cocaine test.

Messi’s achievements in the game are incomparably greater. If football was only about football, the argument is over.

But football is about more than that. The Maradona film captures some of those intangibles, the things that are not preserved by the statistical record. To watch the scenes of celebration after Maradona leads Argentina to the World Cup in 1986, and then Napoli to their first ever Serie A title the following year, is to doubt whether any titles in the history of football have ever meant more. Next to this hysterical euphoric abandon, Messi’s diligent accumulation of 10 titles in 15 seasons with Barcelona looks a little...bloodless.

Why did Maradona inspire such passionate devotion among the fans of Argentina and Napoli? The main reason, obviously, is that he dragged unfancied teams to titles nobody thought they could win, routing historic enemies such as England and Juventus along the way and scoring some of the greatest goals anyone had ever seen.

But it was also because of the style in which he did these things. Remember that Maradona made his professional debut aged 15, but by then he had already been famous for years, thanks to the ball-juggling exhibitions he would put on at half time in Argentinos Juniors games.

In the beginning it was just him and the crowd – and he never stopped playing for the crowd in all the years that followed. He responded to the emotion in the stands, and reflected it back at them in amplified form. He was the most expressive of all the great players, and the fans and his team-mates loved him for it.

That is the most obvious difference between him and Messi, whose field persona is as cold and expressionless as a shark. Nobody has attacked Messi more furiously for the crime of being an impassive introvert than Maradona himself. Last year he told Mexican TV: “you can’t make a leader out of a guy who goes to the toilet 20 times before a game.”

Maradona had to put up with quite a bit of that sort of personal criticism himself as a young player. As Pele told the newspaper Clarín on the eve of the 1982 World Cup: “My main doubt is whether he has sufficient greatness as a person to justify being honoured by a worldwide audience.”

Nobody forced him to betray his wife, to refuse for decades to acknowledge he was the father of his son, to become a cocaine addict and so on

Pele’s “doubt” may have been rooted in jealousy, but you could argue he was proved right in the end. Kapadia’s film charts the shocking downfall, and it is astonishing to think that for much of the second half of his seven-year career at Napoli, Maradona was spending Sunday night to Wednesday morning every week drinking and doing drugs.

These habits continued for years after his first positive drugs test in 1991: as Jonathan Wilson reports in his history of Argentina football, Angels with Dirty Faces, one of the lowest points was the morning Maradona’s young daughter walked into the bathroom to find him snorting a line of cocaine.

After that disgrace he agreed to see a therapist, with whom he often spoke about an episode from his childhood when he fell into a cesspit and heard his uncle screaming at him to keep his head above the shit. His final retirement from football, aged 37, was prompted by yet another positive test for cocaine.

How culpable was he for his own downfall?

Nobody forced him to betray his wife, to refuse for decades to acknowledge he was the father of his son, to become a cocaine addict and so on. And yet how can you judge the individual outside the context?

The way people behave towards the ultra-famous is insane, and eventually the insanity rubs off. Maradona had been treated like a god by everyone around him since his mid-teens. If he ultimately lost his grip on reality, then there were millions of people who helped to loosen his grasp.

His open and passionate nature, his emotional receptivity and suggestibility, the same qualities that gave him such charisma on the field were fatal weaknesses off it.

If he had been cooler, more reserved, more sensible – more like Messi? – then maybe he could have protected himself, sustained his excellence for several more years, finished his career with dignity.

And, perverse as it may seem, that career probably would not be remembered half so fondly today.