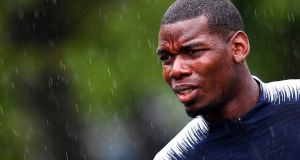 Paul Pogba has made his move to drive a summer transfer from Manchester United – with Real Madrid and Juventus most prominent among his suitors – by saying that this “could be a good time to have a new challenge somewhere else”.

Real like their targets to make public their desire to leave their clubs. The Tottenham midfielder Christian Eriksen did so two weeks ago and Pogba has followed suit.

“There is a lot of thinking [going on],” Pogba told reporters in Tokyo, where he is on a promotional visit. “I have been three years in Manchester and have been doing great – some good moments and some bad moments, like everybody, like everywhere else.

United’s position is that they expect Pogba to remain their player next season but whether a massive offer for the France World Cup-winning midfielder would change that is open to question.

Zinedine Zidane, the Real manager, wants Pogba as he overhauls his squad following a desperately disappointing season and the club’s board – at least in theory – want to give him what he wants, although they have suggested to him that Eriksen would be the better option. There is a belief at Real that United would sell Pogba for the right money.

On the other hand, Real have spent €305 million million on six players this summer, with the headline arrival being that of Eden Hazard for an initial €100 million from Chelsea. They have also taken Serbian midfielder Luka Jovic from Eintracht Frankfurt for €60 million; Brazil centre back Éder Militão from Porto for €50 million; Brazilian winger Rodrygo for €45 million from Santos; French defender Ferland Mendy for €48 million from Lyon; and Takefusa Kubo for €2 million from FC Tokyo.

For them to make any further big-money signings, they would have to get sales going quickly – and several of them – and it is unclear whether they will be able to get what they want from the various players that Zidane has deemed surplus to requirement, including Gareth Bale.

Juventus, who have signed Pogba once from United – on a free in 2012 when he was 19 – have been in contact with the club to see whether they would consider parting with him again. The Serie A champions have taken Maurizio Sarri from Chelsea to replace Massimiliano Allegri as the manager and they want to give him a world-class midfielder. They were interested in Lazio’s Sergej Milinkovic-Savic only to be put off by his €90 million asking price.

Pogba, who returned to United from Juventus in 2016 for a then world record €105 million, has retained an excellent relationship with Fabio Paratici, the Juventus sporting director, as well as several of the players.

In May the 26-year-old was the only non-Manchester City or Liverpool player to be named in the PFA’s team of the season and he has offered glimpses of his quality in a United shirt. Yet too often he has been peripheral in the biggest games.

When he fell out with José Mourinho last autumn, the writing seemed on the wall in terms of his United career, only for him to revive, initially, under Ole Gunnar Solskjær. His desire to move on, though, has endured and it is significant that his agent, Mino Raiola, has had a three-month worldwide ban from football activity lifted by Fifa, clearing him to trade this summer.

United, who can offer only Europa League football after their sixth-placed Premier League finish, have signed Daniel James from Swansea for £15 million and are pushing to get Aaron Wan-Bissaka from Crystal Palace, having had an initial bid worth more than £40 million rejected. – Guardian