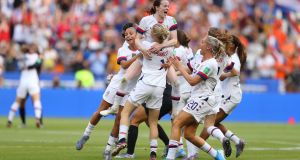 Rose Lavelle was 9 and a half - the half is important, if you’re 9 - when the women that changed everything arrived in Cincinnati.

It was October 2004, a few months after the United States women’s soccer team had won the gold medal in the Athens Olympics, five years after it had conquered the world. Mia Hamm, Brandi Chastain and the rest were traveling the country, playing exhibition games, as a sort of victory tour.

Lavelle was there to watch at the Paul Brown Stadium for a game against New Zealand. It was more of a carnival than a contest: the Americans won, 6-0, the sort of procession that - in the eyes of a child - befitted their greatness. Lavelle fell for them, and fell hard.

She became “obsessed,” she said a few weeks ago, with the team that would go down in history as the 99ers, the team that won the World Cup on home soil in the year that became its calling card, the team that transformed the arc of women’s soccer in the United States and, more slowly, around the globe.

On Sunday, in the baking heat of Lyon, Lavelle scored the second, clinching goal as the latest incarnation of the United States women’s national team beat the Netherlands, 2-0, not just to lift the World Cup, but to do what the 99ers did not quite manage, and retain it. “It’s crazy how things come full circle,” Lavelle said.

Pretty much everyone on this team has a story about the 99ers, even those who were too young to remember them firsthand, whose knowledge has been drawn - like Lindsey Horan’s - from videotapes. They have all taken inspiration from what those players did. They have all inhaled their greatness, and come to revere their status. Horan, for example, had been told that several of the 99ers had come to Lyon to watch this final. Even with a World Cup winner’s medal around her neck, she seemed a little star-struck, somehow stunned by the idea that they should be watching her. “They are the legends that we all look up to,” she said.

In March, when the United States played England in the SheBelieves Cup, the players were asked to nominate a woman who had inspired them. Their jerseys, for that night, would be emblazoned with their heroines’ names, rather than their own. Sam Mewis, who was 6 in 1999, went for Hamm; the goalkeeper Adrianna Franch went for one of her predecessors, Briana Scurry.

A month later, the members of the 1999 team were presented to the crowd at halftime of a friendly against Belgium in Los Angeles. “They are still a big presence in our lives,” Horan said.

Even at a distance of a generation, it is a presence all the current players feel, an almost tangible link with what might otherwise feel like an age of myth.

“They laid a foundation for us,” Lavelle said. “They laid this mentality out of never give up, never say die.” Horan said that she feels that the “fight and the mentality started with them.”

The 99ers are widely credited with creating the atmosphere that young players find when they first enter this team: not intimidating or inhibiting, according to Tierna Davidson — at 20, the youngest member of the current squad — but “close-knit, resilient, incredibly uplifting.”

“There’s a natural selection,” she said. “I think if you don’t have that attitude, you get weeded out. The identity of this team is badass women, who fight to the death, who have each others’ backs no matter what. The type of person this team attracts is resilient, gritty.”

That can be traced to the United States national team as the 99ers envisioned it, as they defined it. Those characteristics that were inculcated in this program two decades ago are the same that swept this edition of the team to glory in France: a willingness to run harder, faster, farther than anyone else; a refusal to countenance the idea of defeat; a ruthless, defiant streak.

Those traits are now hard-wired into the team, however much the players change, however fast the clock ticks, what Davidson described as an “unnamed American culture of desire and want and grit.” That is the tradition that any player who steps into this team has to maintain; those are the standards that, Alex Morgan said, this current team is “doing a pretty damn good job” of keeping.

In that sense, this final was a fitting one. Unlike in 2015, it was not over after a quarter of an hour; it remained in the balance for an hour, more, until a Megan Rapinoe penalty and Lavelle’s wonderful strike and the cumulative weariness of a long month under the hot sun ended the Dutch resistance. The United States had to work for this triumph.

It hurt, sometimes literally: Kelley O’Hara left the field at halftime after clashing heads with Lieke Martens; Becky Sauerbrunn had to continue with a cut above her right eye; Morgan had a badly bruised arm, ample sacrifice to win the penalty that Rapinoe converted.

And in doing so, this team surpassed the achievements of the team that has for so long served as its inspiration, its gold standard, its idols.

There has been a sense, right from the start, that the United States was not in France to compete against flesh-and-blood rivals; it always seemed to have too much for any foe that crossed its path.

The Netherlands lasted longer than anyone, though watching Stefanie van der Gragt, its central defender, draw every last jolt of energy from her exhausted body in the last few minutes simply to stop Morgan or Tobin Heath or Carli Lloyd from turning a defeat into a rout told a story. The Dutch had been taken to the edge of their capacity, and then pulled headlong beyond it. Like everyone else, they could not live with the Americans, not over 90 minutes.

No, the United States’ main opponent has not been physical, but temporal. This team has been here to compete with history, to see if it could take the one step that eluded even the 99ers, and retain the World Cup.

Not only has it succeeded, with an air of inevitability, but it has done so after a tournament in which the standard has been higher — and the competition fiercer — than in any previous edition. It has witnessed a surge in quality around the globe, and it has met the challenge. It is, without question, the best team in the world. It may be, now, the best of all time.

The players themselves, of course, would not go that far. “I hate comparing us to past teams,” Morgan said. “We all have our own legacy.” But they remember well enough the impact the 99ers had on them, the power that success can bring, the inspiration it can provide.

Just as the young Lavelle watched, rapt, as Hamm and Chastain and the rest swept past New Zealand, transfixed by their greatness, so too will aspirant internationals watch Lavelle with shining eyes; just as the young Horan pored over videos of that triumph, so too will the clips and gifs of what she and her teammates have achieved hypnotise a new generation. “Hopefully we will become legends to future internationals,” she said.

Things do come full circle, and the circle keeps on turning, a tradition passed down through the years, through the decades, a torch that keeps on burning.

High in the stands of the Stade de Lyon, two girls stood watching the United States celebrate, glitter spread across the field, firework smoke in the air. They looked about 8 or 9. Heath and Horan, their jerseys read. They looked down at the celebrations. They stood perfectly still. They could not tear their eyes away. - NYT

1 Dan Tuohy explains ‘rotten to the core’ comments
2 Six Nations: No place to hide for Ireland’s misfiring captain
3 From stationary carriers to centres of excellence - five things we learned
4 Kilkenny’s Adrian Mullen ruled out for the season with a knee injury
5 Contepomi says Leinster can learn lessons from nature of Ireland’s defeat
Real news has value SUBSCRIBE
Crossword Get access to over 6,000 interactive crosswords